The number and value of mergers and acquisitions in the education industry rose sharply over the most recent year, fueled by deals in professional training and by consolidation in some areas of K-12, a new analysis has found.

There were 418 mergers and acquisitions in the education industry in 2015, up from 329 in 2014, according to research by the investment bank Berkery Noyes.

The value of the deals over that time period, meanwhile, jumped by 52 percent, to about $18 billion, said Berkery Noyes. The investment group provides advice and financial consulting to middle market companies in the technology and information space. (See chart, below)

The industry’s biggest area of activity in 2015 was in corporate and professional education, where continuing education and workforce development continues to be a major need, the analysis concludes.

But mergers and acquisitions were also pushed along by consolidation in various areas of K-12–including data and assessment, content management systems, and human capital and talent management, Berkery Noyes explained. 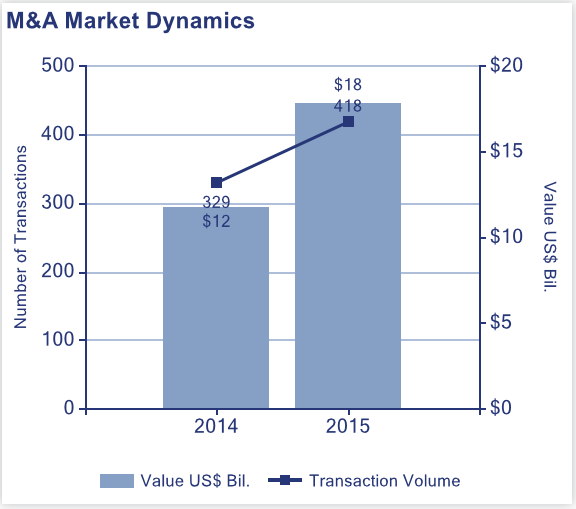 Among some of the notable deals in the K-12 space cited in the company’s report: Houghton Mifflin Harcourt’s acquisition of Scholastic’s education and technology services businesses for $575 million; Vista Equity Partners’ purchase of PowerSchool, the student information system, for $350 million; McGraw-Hill Education’s sale of much of its testing assets to Data Recognition Corporation; and Pearson’s sale of the Family Education Network.

The portion of strategic transactions in the education industry  rose from 55 percent to 74 percent over the most recent year, Berkery Noyes found, while the percentage of financial transactions fell from 45 percent to 26 percent.

Buyers in the K-12 industry today tend to be looking for “recurring revenue from companies that have traction and repeat sales, and whose products are finding adoption among  more school districts,” the report says.

Clarification: This post has been updated to note that some of the deals cited in the report, involving Houghton Mifflin Harcourt, McGraw-Hill Education, and others were among the most prominent transactions over the past year, not necessarily the biggest.

One thought on “Education Industry Mergers, Acquisitions Jumped Significantly in 2015”