Much of the public’s focus during this year’s mid-term elections is on the battle for control of the U.S. Congress.

But it’s the races for state-level offices around the country that are likely to have a much bigger impact on education policy and companies working in the K-12 market.

More than two-thirds of seats for governor are at stake in November’s elections, as are three-quarters of state legislative seats. Republicans have control of statehouses in the majority of states, though Democrats are confident they’ll dig into those margins.

Why do state races matter so much to the education market?

It’s partly because state and local officials control the purse-strings for the vast majority of money that flows into K-12 education–about 90 percent of it. The feds contribute only about 10 percent, albeit for some critical pots of money, like Title I and Title II funding.

Governors and state lawmakers have the power to make sweeping changes in education policy that lift or sink K-12 district budgets. They can create mandates that compel districts to spend on specific priorities. And of course, they can pass laws that shape policy in school choice, and the purchase of curriculum, professional development, academic interventions and other programs.

This year, candidates for governor and the legislature in Florida, Wisconsin, Kansas, Arizona, and other states have made increasing school funding a priority. The drive to spend more on K-12 education is being led by Democrats in many instances, though not all.

In Florida, the Democratic nominee for governor, Andrew Gillum, has called for pumping $1 billion more into education–the state’s total pot of K-12 funding is about $20 billion–by raising corporate taxes. He also supports legalizing marijuana and taxing it to generate revenue for schools.

He also says he opposes “for-profit charter schools,” in Florida, where commercial managers of charters have a strong presence.

“Public education is still the best path to equal opportunity,” the candidate says on his website, but “Florida’s education reform has been a failure. Our education system and its over-reliance on high-stakes testing has failed our children, our parents, our teachers and our state.”

State Board Seats Up for Grabs, Too

Gillum’s proposal will surely prove popular among Florida districts officials, who have complained for years that school spending under incumbent Republican Gov. Rick Scott has failed to keep up with costs, leaving them in a perpetual state of catch-up.

Backers of Gillum’s opponent, Republican Congressman Ron DeSantis, have branded the Democrat’s spending plans as reckless. An example of his “radical, far-left policies,” was how an ad released this week by the Republican Governors’ Association put it. 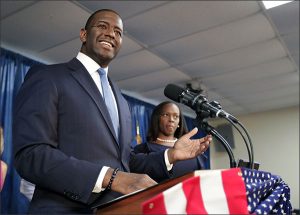 DeSantis says he will also promote vocational and skills-based training in education, and increase the study of civics and the U.S. Constitution. He also says he will “enhance parental choice programs.” In addition to having a vast charter school landscape, Florida allows private-school vouchers in some contexts.

Here’s a summary of the state election landscape in 2018, courtesy of the Education Commission of the States:

In many districts, state elections “are even more consequential in terms of the impact on the budget than any federal election is,” said Noelle Ellerson Ng, the associate executive director of policy and advocacy for AASA, the School Superintendents Association.

That’s especially true now, because many district officials believe state support for district programs and personnel have eroded over the past few years, and have not kept up with costs, she said.

In particular, districts are desperate for money to pay teacher salaries and prevent them from leaving the profession, or for other school systems. Districts also need money for non-academic programs such as after-school services, counseling, and mental health; and to repair outdated or dilapidated school infrastructure, said Ellerson Ng in an interview.

When candidates are vowing to provide schools with more money “that’s a message that will resonate more this year than in previous years,” Ellerson Ng said. Office-seekers are talking about K-12 funding because the situation “has gotten so bad.”

A number of states–such as Arizona, Kentucky, and Oklahoma–have been the site of major protests by teachers over school funding. It’s a safe bet that K-12 funding will remain a major issue in those states well beyond election day, she said.

But in other states, she added, it’s not clear if political momentum will lead to more money for K-12, once lawmakers begin the process next year of putting budgets together.

Even so, if Democrats carve into or upend GOP majorities in statehouses, recent history suggests it could signal a significant change in state education policy, in funding and other areas.

Take the 2010 mid-terms, for example. Republicans in state elections across the country that year rode a wave of partisan fervor against Democratic policies, including those of President Obama, seizing control of a majority of governor’s offices and more legislative seats than they had at any time since the 1930s.

And they quickly began putting their stamp on education policy. Many GOP leaders fought to hold the line on state spending, enacting tax policies that critics say have had an impact on state education budgets to this day.

Republicans also took steps to oppose the Common Core State Standards and fought to dismantle teachers’ collective-bargaining rights, arguing that it would free up district spending on other priorities.

Referenda with big consequences for schools have also made it into the ballot in a number of states. In Colorado, activists gathered enough signatures this fall to put Initiative 93 before voters. The item would raise the tax rate on corporations and individuals making more than $150,000 to bring more than $1.6 billion to public schools, as my colleague Daarel Burnette reported.

That would mark a major shift in Colorado, where a “Taxpayer Bill of Rights” severely restricts the amount of money the state can spend and the amount of taxes it can collect without voter approval. Public school officials say the measure has produced a $6 billion public education shortfall over time.

“What we heard over and over from community members is that they had no idea how bad funding for our schools has gotten and the impacts on students and educators,” said Kerrie Dallman, the president of the Colorado Education Association. “Our hope is that [it] translates to the ballot box in November.”

Whether this year’s elections bring a similarly dramatic shift, or a modest one remains to be seen. But the results are almost certain to be felt in classrooms, and among the K-12 businesses that serve them.