That’s one of the key findings from new research conducted by LearnPlatform on more than 8,600 digital tools and platforms used in K-12 schools.

And the “EdTech Top 40” analysis indicates that school districts are reaching for more ed-tech tools than ever before.

The average U.S. school district with more than 1,000 students accessed 1,449 ed-tech tools last school year, according to the analysis. That’s an increase of 52 percent compared to the 2019-2020 school year before the coronavirus outbreak, and up 9 percent during the same academic year following the onset of the pandemic.

The analysis is based on real-time online activity generated from more than 2 billion data points using a plug-in on Google’s Chrome browser that identifies what ed-tech tools are being used in schools. It includes data from nearly 254,000 educators and more than 2 million students.

LearnPlatform — a management system that seeks to organize, streamline, and analyze ed-tech utilization — identifies the individual products that were most popular and groups them by category, ranking each digital tool based on the percentage of users. 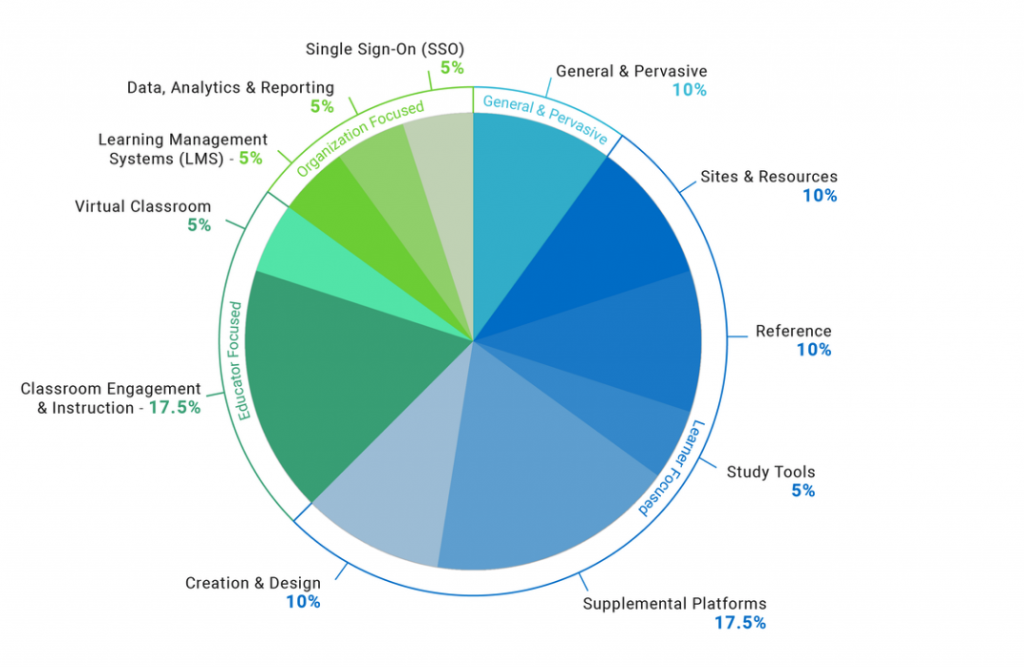 One of the notable trends from the 2021 analysis: Ed-tech tools primarily focused on classroom engagement and instruction or supplemental platforms grew more popular during the last academic year, said Karl Rectanus, CEO and co-founder of the company that conducted the analysis.

“For ed-tech providers, the big story is focusing on learners and how educators can engage learners,” he said. “Those have been the biggest winners to date.”

For the first time, LearnPlatform created a category for products that focus on virtual classrooms. When combined with digital tools serving engagement and supplemental platforms, the three categories combine for about 40 percent of  the most popular ed-tech products used during the last school year.

Digital tools that fall into the classroom engagement and instruction category include Jamboard #(22) PearDeck (#29), and Blooket (#33), all three making their first appearances on LearnPlatform’s top 40 list since it was first published in 2018. Some of the products primarily serving supplemental platforms include Khan Academy (#21), BrainPop (#34) and NearPod (#21).

Meanwhile, Kahoot! led the “assessment” category, as the seventh-most-popular tool overall, above Quizizz (#15) and FlipGrid (#17).

With so many digital products — many of them redundant — being used by school systems there’s a general sense that educators are overwhelmed by the current ed-tech landscape in their respective districts, said Rectanus, the CEO of the company that conducted the analysis.

And while having a variety of choices for digital learning tools is preferable, said Rectanus, the practice of educators accessing nearly 1,500 different ed-tech products in a given month is just “overkill.”

“It’s hurting the process and likely contributing to feelings of burnout,” he said.