Many districts around the country are taking steps to make their data “interoperable,” or they’re at least beginning to explore the rewards and costs of making that leap. All of that activity has clear implications for companies in the K-12 market.

A new Education Week special report  takes an in-depth look at the challenges districts face in trying to move toward interoperability, which is generally defined as the attempt to allow for effortless sharing of data across different ed-tech tools and platforms. Districts see a big upside in being allowed to bring together those disparate data streams in student academic performance, attendance, and other areas and make them more useful and “actionable” for administrators and teachers.

The report is loaded with interviews with district tech leaders who are trying to make interoperability work for them. It also features original survey data collected from K-12 chief technology officers on their hopes for interoperability, and their concerns about it.

Here are five takeaways that vendors need to know about K-12 districts’ interoperability, based on what we learned from our conversations with district leaders and others for the report:

1–Data reporting is a huge burden for K-12 district leaders, and they’re convinced interoperability can help.

In an original survey conducted by the Consortium for School Networking and Education Week and published in the report, K-12 chief technology officers were asked what they think are the biggest challenges interoperability can solve. The highest portion of respondents, 56 percent, say they “completely agree” that interoperability can make federal and state reporting more efficient.

The ability to access digital content is the second-most important challenge that interoperability can help with, cited by 47 percent of district CTOs. Building better district-level dashboards (46 percent) and scheduling and rostering (44) also ranked high on the list. 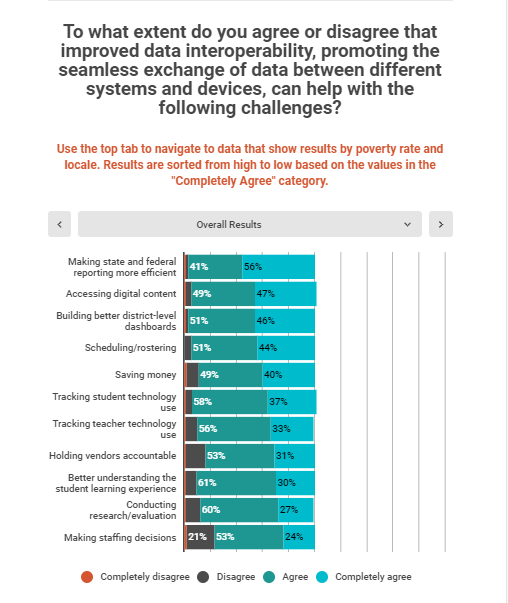 2–Interoperability can serve the needs of many district departments, not just one or two of them.

That was one of the points was made by Rebekah Kim, the executive director of teaching and learning for the Highline school system in Washington state. The district’s journey toward interoperability is profiled in the report.

“The systems we have in place, from operations to human resources to the classroom, all influence each other,” Kim said. “So we want to be able to answer questions like, ‘Does the consistency of transportation pick-up times influence student attendance and chronic absenteeism?’”

What this might mean is that vendors who are marketing their K-12 product to one department of the district in particular–curriculum, or human resources, or a central office focused on attendance–need to be aware they’ll be asked if their system can share data with other departments, too.

The upside for vendors, of course, is that if they can meet an interoperability standard, they can end up pleasing an entire group of top-level district administrators, not just one or two of them.

3–Advocates for requiring K-12 interoperability from vendors believe the wind is at their backs.

District officials are participating in standards-setting organizations, such as the IMS Global Learning Consortium and Ed-Fi. Involvement in these groups (vendors belong to these organizations, too) has not only increased districts’ basic understanding of how interoperability works; it has also given administrators confidence that they have strength in numbers, in demanding interoperability from ed-tech companies, explained Melissa Dodd, the chief technology officer in the San Francisco Unified School District, in a Q-and-A in the report.

“Districts have been talking about interoperability for many years,” Dodd explained. “What I see now, with the districts that are part of the Ed-Fi alliance—similar to IMS Global—are the economies of scale. More of us are harnessing our buying power and the influence we have to push the technology sector to make the shift with us.”

4–At the same time, K-12 leaders do not appear to have settled on a standard for interoperability.

Lack of standards were seen as an even more acute problem than budget constraints, which 18 percent of CTOs said was very challenging.

And it was seen as a much more daunting problem than was resistance from vendors. Just 11 percent said vendor skepticism was very challenging, and 19 percent said it was challenging.

5–Districts see interoperability as a way to help them wrest some control over data from vendors.

As was explained by Mark Finstrom, the chief technology officer in the Highline school system, his district has traditionally been overly reliant on vendors to produce answers about the impact their products are having in schools. That’s partly because vendors were storing different kinds of data in different servers, he explained.

“If you don’t have the ability to control the way data are moving, you end up having a mess,” Finstrom said.

Many districts already expect vendors to provide data on their products’ usage in schools by teachers and students, to get a better understanding of not only the academic impact, but also if the district is getting what it’s paying for.

Check out the full report, including the nationwide CoSN/EdWeek survey results, here.