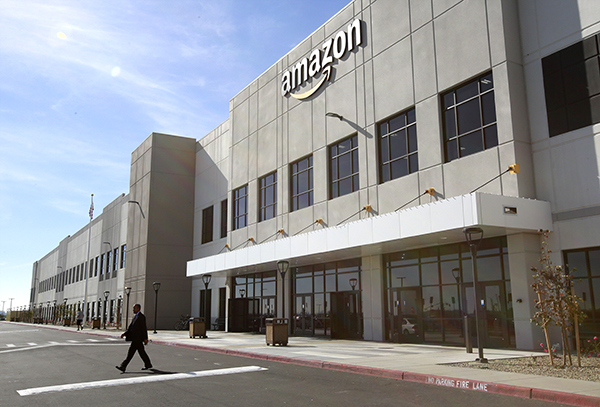 Amazon could receive up to $5.5 billion over the next 11 years through a cooperative purchasing contract used by cities, counties, and school districts alike—and that’s got some people fired up.

They’re concerned that if Amazon wins government and school purchases for everything from paper products to musical instruments, it will mean that other businesses selling directly to public entities will suffer, possibly eroding local economies.

And they’re questioning whether the 1,500 jurisdictions that have adopted the cooperative purchasing contract are really getting the best price for their purchases from Amazon when they use it.

A price-tracking firm found that a school district “would have paid 10 to 12 percent more buying from Amazon” than from a fixed-price cooperative purchasing contract, according to Amazon’s Next Frontier: Your City’s Purchasing, a recently released report from the nonprofit Institute for Local Self-Reliance.

The sweeping Amazon Business contract was signed in January 2017 under U.S. Communities’ cooperative purchasing program, using the Prince William County, Va. school system as the lead agency. The RFP indicated that the contract was estimated to be worth $500 million annually for the first five years, with three, two-year renewal options.

The contract signed with Amazon allows the company to provide dynamic pricing, as opposed to adhering to a fixed price that is guaranteed in most cooperative purchasing contracts.

“A government buyer has no way of knowing when it’s getting the lowest price,” Olivia LaVecchia, a senior researcher at the institute, and co-author of the study said in an interview.

The institute concluded that the cooperative agreement “lacks standard safeguards to protect public dollars and public transparency, and puts cities and schools at risk of paying more and getting less.”

Amazon, in a statement issued in response to the report, said the procurement program offers advantages to buyers and the public.

“Amazon Business offers features and benefits that help simplify the procurement process and increase efficiency for buyers,” the company said, including spending analytics designed to give greater transparency.

The company also argued that its “multi-seller marketplace…assists buyers in identifying new, diverse suppliers for meeting their socio-economic purchasing goals.”

A Look at One District

The Prince William contract gives other districts, schools and cities that are members of the U.S. Communities program the option of buying from 10 categories of mostly physical goods, from clothing to scientific and lab equipment to books. As my colleague Sean Cavanagh wrote when the contract was signed, the purchasing program is not focused on technology, but districts can buy certain types of ed-tech through the procurement, such as electronics and digital books, as well as TV and audio-related equipment.

To determine how much business the purchasing program is producing for Amazon, the researchers from the institute asked for data from several entities that are members of the U.S. Communities Advisory Board.

The Denver Public Schools district is represented on the U.S. Communities board, and it has seen the largest increase in spending through Amazon of the districts that were evaluated in the institute’s report—a 77 percent rise from 2016 to 2017.

“Like other agencies, Denver Schools’ largest spend was for books through Kindle, but its records also show many purchases of calculators, printer cartridges, dry-erase boards, post-it notes, and other commonly available goods,” the report said.

The chart below, based on data the district provided to EdWeek Market Brief, shows how Denver schools increased Amazon spending over the past three years. 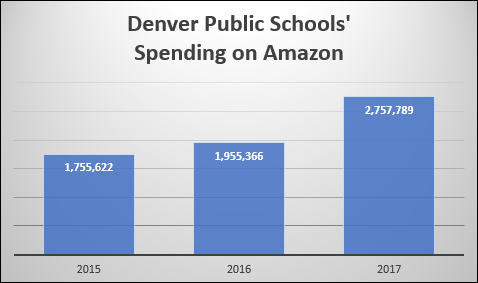 But Mark Ferrandino, the chief financial officer of Denver schools, said the $2.7 million is a “small percentage” of the district’s overall spending, which is between $1.2 billion and $1.3 billion. “It’s not a huge amount of money when you look at each individual transaction,” he said.

The spending also reflects the flexibility and autonomy Denver schools have, in that purchases are made at the school level, he said.

“For commodities, we enter into contracts with a lot of different organizations,” he said. Sometimes school leaders will choose to use a contract that is part of a cooperative agreement, but they are not required to do so, Ferrandino said.

Prince William County school district representatives did not respond to our request for a comment on the report.

School districts have to weigh a variety of factors in considering the true cost of a purchase, said John Musso, executive director of the Association of School Business Officials International.

“ASBO’s position is that each school district needs to make a decision on what is in their best interest,” said John Musso, the organization’s executive director. “Every purchase made by a school takes into account a variety of factors, of which price is just one component.”

One of the benefits of cooperative purchasing is “the soft cost savings of being able to piggyback off an existing contract,” said Musso. “The time and staff resources to do an RFP can be significant.”

Pricing differences can be offset by other factors that offer value to a district, he added.

U.S. Communities, which has 55,000 members from educational institutions, government agencies, and nonprofits, is funded by the 1 percent to 2.5 percent administrative fee it receives from each contract supplier. That means the organization could receive between $55 million and $137.5 million if the five-year Amazon Business Contract is extended for two additional optional three-year periods, LaVecchia said.

Many K-12 companies hoping to work in districts scuttle their chances in the first few minutes, by revealing they haven’t done their homework on that school system. In an EdWeek Market Brief webinar on Aug. 21, we look at the kinds of information — about budget conditions, demographics, academic and data goals — that vendors need to know, before the first phone call or meeting. You can sign up for the webinar here.

U.S. Communities’ officials said that districts that sign onto the cooperative purchasing deal agree to a “non-exclusive and discretionary” arrangement. They can arrange purchases of products independent of the agreement whenever they want.

LaVecchia, of the Institute for Local Self-Reliance, said independent office supply businesses are among those that will find themselves possibly threatened by an agreement like Amazon’s.

“They’re one of the primary sectors impacted by this contract and the type of businesses that were really shut out of it,” she said.

The institute’s report focuses on Virginia-based Guernsey Inc. as an example of a company whose founder is wary of the impact Amazon will have on his company and community.

Guernsey was part of an Independent Stationers cooperative of office product dealers that held a five-year U.S. Communities contract until 2015. Company officials felt shut out of the new RFP, according to the institute’s report. That’s because it was written for an “online marketplace for the purchase of products and services,” many of which were well beyond the scope of an office supplies company.

While the purchases made through the cooperative purchasing program are now small, school districts’ and other governments’ reliance on them could grow over time.

“It’s on public sector officials to more closely scrutinize this company, and question the ways it’s starting to do more business,” she said.

CORRECTION: This blog post was updated on Saturday, August 4 to reflect the accurate estimated value of the Amazon contract for the first five years. That amount is $500 million annually, according to the RFP.

9 thoughts on “Amazon’s Footprint Grows in K-12 Purchasing. Should We Be Worried?”