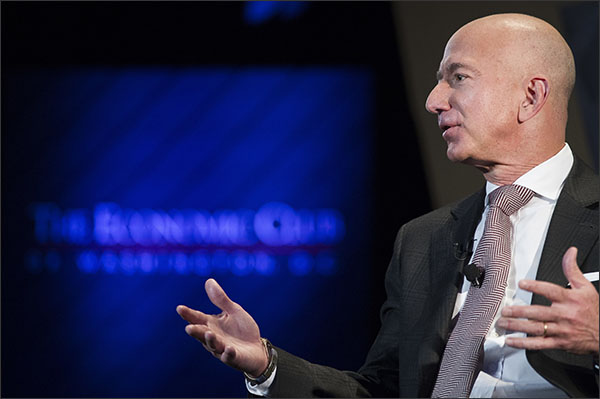 Amazon CEO Jeff Bezos, now considered to be the world’s richest man, took to Twitter Thursday to announce that he and his wife Mackenzie are contributing $2 billion to launch new preschools in underserved communities and tackle the issue of homelessness in young families.

The philanthropic efforts will come under the umbrella of the Bezos Day One Fund, the billionaire wrote in his tweet.

“The Day 1 Academies Fund will launch and operate a network of high-quality, full-scholarship, Montessori-inspired preschools in underserved communities,” Bezos wrote, although he did not specify precisely how much would be allocated to that fund. The other priority will be the Day 1 Families Fund, supporting organizations and civic groups doing “compassionate, needle-moving” work to provide food and shelter for young families.

Bezos vowed to build an organization that will start and operate the preschools, adding that, “I’m excited about that because it will give us the opportunity to learn, invent, and improve.”

In the new preschools, “the child will be the customer,” Bezos wrote, a rare use of the business concept about preschoolers. Bezos promised to apply the same principles that have driven Amazon—most important among them, “a genuine, intense customer obsession.”a.

“There’s certainly a big buzz in the early-childhood community about this today,” said W. Steven Barnett, the director of the National Institute for Early Education Research at Rutgers University, in a phone interview.

He saw the announcement as a recognition of the need for higher-quality programs. “In the vast majority of communities, the government response has not been adequate, either for the numbers of kids or to provide the necessary dosage—the intensity and quality—that’s required to get the benefits that research has shown we can get, but all too often don’t.”

Rhian Allvin, the CEO of the National Association for the Education of Young Children, applauded Bezos’ due diligence in making the decision to invest in early learning.

Asked what advice she would give the billionaire about starting the preschools, Allvin said it’s important to understand existing supports from the federal government, states’ and cities’ investments to bolster lower-income families with young children. She would encourage Bezos to take advantage of the “systems and structures” that are already in place, by making sure there are wraparound services like those from a pediatric clinic or a family resource center for each preschool.

“There’s a way to leverage that investment with the resources available in the community,” she said. “High-quality learning often sits in the center of that.”

Barnett sees Bezos’ work as laying a foundation. “There’s some hope that these can act as kinds of lighthouses … that will be inspirational and motivational for the larger public effort to address these problems,” he said.

Mira Debs, the executive director of the Education Studies Program at Yale University, agreed about the magnitude of the contribution. “It’s exciting to see a significant amount of funding being put toward these efforts,” she said.

At the same time, she questioned whether it’s really necessary to start Montessori-like schools. “I also know of a lot of existing Montessori organizations doing incredible work in underserved communities that are always looking for funding,” she said, citing the work being done at the Keres Children’s Learning Center in New Mexico’s Cochiti Pueblo as an example. There’s also a great need to support teachers of color in getting Montessori training, she said, referring to the work of Embracing Equity, an organization that addresses equity in an online learning platform and through in-person workshops.

Bezos did not explain why he chose Montessori, or “Montessori-inspired” instruction. It is an educational approach that emphasizes child-directed learning with hands-on activities and collaborative play.

However, Bezos told Montessori LIFE nearly two decades ago that he attended a Montessori school for about a year and a half, starting when he was 2 ½ years old and his family lived in New Mexico.

Bezos said “it was probably a very formative experience for me to be able to go to those classes, in that environment, and be so stimulated at an early age. I don’t actually know what the scientific research shows, but intuitively, I have to imagine that it’s good for little kids.”

A researcher who has studied the Montessori model for more than 20 years is Angeline Lillard, a professor of psychology at the University of Virginia and the director of the Early Development Laboratory. Among her papers is a peer-reviewed study published in 2017 that found Montessori to be effective in closing the income achievement gap.

“I know of no research that shows Montessori-inspired is better than Montessori,” she said.

Last year, Education Week covered the rising popularity of the educational model in public schools, thanks to burgeoning charter and parent-advocacy movements.

In July, Bloomberg declared that Bezos was not just the richest man in the world, but the “richest man in modern history” when his net worth exceeded $150 billion.

He has come under some criticism for not sharing more of that wealth in the form of philanthropy, and seemed to address that critique in the text of his tweet, by saying he has made “financial contributions to the dedicated and innovative champions of a variety of causes, from cancer research, to marriage equality, to college scholarships for immigrant students, to decreasing political polarization through cross-partisan support of principled, next-generation military vets running for Congress.”

Bezos and his wife join Bill and Melinsa Gates and Mark Zuckerberg and Priscilla Chan who, through their foundations, provide millions to support various initiatives in public education.

Earlier this year, Bezos asked his Twitter followers for ideas about how to give away his money. He closed today’s tweet by “thanking everyone who sent me suggestions, and for the inspiring examples of innovation I see every day, large and small. It fills me with gratitude and optimism to be part of a species so bent on self-improvement!”

The full text of his announcement is here:

To Barnett, the hope is that this will be an example of philanthropy “steering, not rowing, because they don’t have enough resources. Even the Gates, the Buffets and the Bezoses can’t row the boat for all the kids,” he said. “Assuming it works well, we want to see people follow.”

UPDATE: This blog post was updated on 9/14/18 based on interviews with Rhian Allvin, the CEO of the National Association for the Education of Young Children, and Angeline Lillard, a professor of psychology at the University of Virginia and the director of the Early Development Laboratory. It also draws from Montessori LIFE magazine’s interview with Jeff Bezos published in Winter 2000.

Coverage of how parents work with educators, community leaders and policymakers to make informed decisions about their children’s education is supported by a grant from the Walton Family Foundation, at waltonk12.org. Education Week retains sole editorial control over the content of this coverage.