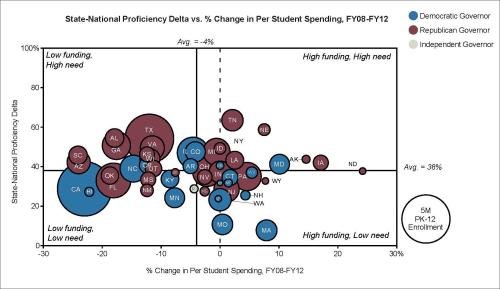 If the chart above appears only to be a mess of undecipherable bubbles, look more closely (or just enlarge the thing). The man who prepared it, Robert Lytle, a head of Parthenon Group’s Education Center of Excellence, sees a business opportunity.

I’ll explain. The chart shows all 50 states plotted based on two factors: the state’s change in per-student education spending, and the difference between how many students scored “proficient” on state tests vs. national tests. The size of each bubble is based on population. A state like California, a populous state that is slashing its education budget but rates its students relatively in line with the National Assessment of Educational Progress tests, goes in the bottom left. A state like Tennessee, where education spending increased between 2008 and 2012 but state test scores wildly overrate students compared with NAEP, goes in the upper right.

It’s in the states in the upper right that the best business opportunity—for both for-profit and non-profit investors, publishers, vendors, and, most importantly, education service providers—can be found, Lytle said.

Those states are among the few actually finding some money. Those are also the states most likely to perform poorly on the upcoming assessments based on the Common Core State Standards, adopted by 45 states. As my colleague Andrew Ujifusa wrote in June, some states are preparing for the common assessments by increasing the rigor of their existing state tests—the large variances in state proficiency requirements are well-documented— but there’s the potential for serious gaps in the early going. An example: Florida tweaked its Florida Comprehensive Assessment Test and 4th graders dropped from 81 percent proficient to 27 percent in one year on the writing test.

“I would anticipate that the performance is going to be poor, if indeed you have a state where they’re making a pretty big shift in expectations,” Kathy Christie, a vice president at the Denver-based Education Commission of the States, told Andrew. (I highly recommend reading Andrew’s piece for more on changing and varying state academic standards.)

So, Lytle reasons, those states suddenly looking at much lower test scores are going to need some help in improving them.

“The market is heading toward big performance gaps,” Lytle said recently in New York City, at a one-day conference on private equity and the education industry that I attended. (Read more about the conference in this article by Reuters.) Parthenon is a global consulting group headquartered in Boston; its education practice counts government agencies, school districts, and education service providers as clients.

When presented to the room of investors at the conference, this chart blew most people away. Those in education know how variations in funding and assessment create 50 different business climates for which companies must adapt. So to simplify things like Lytle did—though it’s never that simple—gave investors hope that a sector notoriously fickle and recently bearish might not be so bad. Especially for companies focusing on these three priorities:

To the left is another chart that supports that theory. The commercial education market grew significantly in the past four years, but no segment grew faster than instruction and services. Think companies like virtual learning providers K12 Inc. and Connections Academy, or publishers-turned-service-providers Pearson and Houghton Mifflin Harcourt (education publishing sales, by contrast, are down from $8.2 billion in 2008, to $7.1 billion in 2011, Parthenon estimates).

While his audience in New York City consisted mostly of for-profit ventures, Lytle told me any group that convinces education officials it can help improve performance will find opportunity.

“Anybody with the ability to help close the performance gap, they are willing to talk to you,” Lytle said. 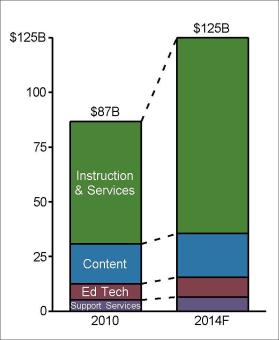 There are, of course, two ways to take advantage of these opportunities. A vendor can offer a product or service that is rigorously proven to improve academic results, so convincingly that districts can’t help but purchase it. Or, as is sometimes the unfortunate case, they can make headway without proving anything.
Companies with great academic results have succeeded, and so have companies with poor results. But the former strategy is expensive for companies, because it requires a lot of product development, third-party research, and a close relationship with districts. From the customer side, schools may struggle with implementation of new products and not see the vendor’s intended results, Lytle said.

Diane Ravitch, an education advocate and vehement opponent of for-profit education, doesn’t have much confidence that schools’ best interests will be considered.

“The bottom line is that they’re seeking profit first,” she told Reuters.

Whether or not that’s true, how will these market forces affect what actually ends up in the classroom? For one, Lytle said, consolidation of the industry is “inevitable,” possibly leaving districts with fewer choices.

Companies with large sales forces will be able to better pinpoint the local opportunities and pitch their wares. And as more service providers enter the market with unique technology, the larger companies will snatch them up to integrate with their own products.

In a couple years, the existing “$5 to $20 million companies won’t be around,” Lytle told the group.

Within the education market, there is another line of thinking, championed by investment groups like NewSchools Venture Fund and Imagine K-12: that the opportunity in education is for startup companies taking a teacher-centric approach, winning customers through product development, not sales forces. In that world, the bigger companies fear the startups, they don’t necessarily buy them. Perhaps that aligns with bigger ideological differences between Silicon Valley and Wall Street.

Either way, with opportunity comes activity and there seems to be plenty on the horizon.