Are parents spending more on technology for their K-12 students this school year? That depends upon which major back-to-school study you consult.
The National Retail Federation, a trade association of merchants, in mid-July reported a decline in anticipated spending on electronics, saying that families planning to invest in a new tablet or smartphone will spend slightly less than last year—$199.05 in 2013, compared to $217.88 in 2012.

But the American Express Spending and Saving Tracker survey, released Aug. 20, predicts a marked increase in technology spending, with half of parents who have school-age children saying they plan to buy at least one digital gadget this season, an increase from 36 percent last year.

The American Express survey of 2,001 adults indicates parents plan to spend $1,094 on supplies, an increase of 26 percent over last year.

By comparison, the retail group’s poll of 5,635 consumers found that families with school-age children will spend an average $634.78, which is down from $688.62 last year. Spending for clothing and accessories (excluding shoes), at $230.85, eclipses anticipated spending for all electronic technology in their survey.

Why the discrepancies in spending profiles?

One factor could hinge on when the studies were conducted, said Melanie Backs, the director of public affairs at American Express, where the polling of the general population and a separate affluent group was carried out July 24-30. The retail organization conducted its survey July 1 – 8. Which questions were posed to respondents is another possible reason.

Factoring in the purchasing habits of affluent buyers does not skew the results, Backs said. Owning an American Express card was not a requirement to participate in the survey, for instance. The biggest difference in the American Express “general” versus “affluent” group findings was that 25 percent of the general population reports planning to buy laptop computers for students, compared to 31 percent of affluent families preparing for school.

“More people are buying gadgets. That’s a trend year-over-year in terms of [students] needing them for back to school,” said Backs. “These gadgets have gone from ‘nice to have’ to ‘necessary to have’ for the school year.”

Tablets were the big category winner, more than doubling the number of shopping lists they appear on—last year, 7 percent of parents planned to buy tablets, and this year 15 percent do. The American Express survey also found an increase in parents’ intentions to purchase scientific calculators (18 percent this year versus 15 percent last year) and mobile phones (13 percent in 2013 versus 12 percent in 2012).

Here’s how American Express captures its results in an infographic: 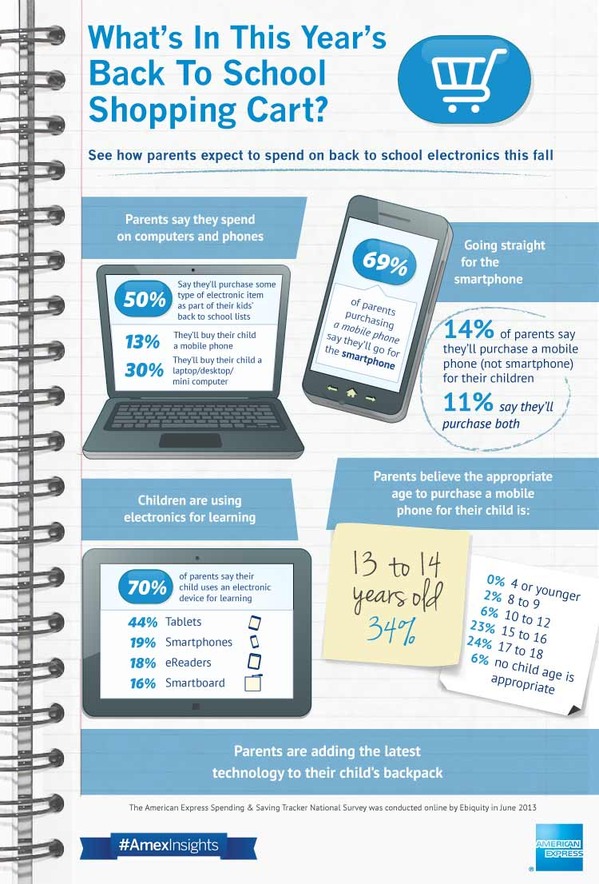 The National Retail Federation was unavailable for comment about the divergent findings in its report compared with American Express’. However, in the retail group’s original release about the results, Matthew Shay, the federation’s president and CEO, is quoted as saying: “The good news is that consumers are spending, but they are doing so with cost and practicality in mind. Having splurged on their growing children’s needs last year, parents will ask their kids to reuse what they can for the upcoming school season.”