The number of mergers and acquisitions in the education industry remained roughly the same during the most recent quarter, with much of the dealmaking playing out in the world of early learning and child care, a new analysis shows.

There were 68 such transactions in the third quarter of 2013, up from 66 the previous quarter, according to Berkery Noyes, an independent investment bank. That’s down from 75 in the beginning of 2012. (See the trend line, below)

Peter Yoon, a managing director on education issues at Berkery Noyes, sees two main factors driving the recent activity among companies serving toddlers and young children. The first is that the child-care sector is a cyclical one. It tends to grow as the economy gains strength—as it appears to be doing now—and both parents enter the workforce, and the need for child care increases, Yoon said.

In addition, when the economy improves, companies tend to increase training opportunities and perks for their current employees. One of the most common perks is to provide child-care services, he said.

The total value of education-related transactions, meanwhile, dropped significantly from the second quarter, from $3.3 billion to $2 billion,or 39 percent, though the median value of those deals was the highest it had been in two years. Yoon warned against reading too much into the big drop in total value, noting that a single big transaction or two could skew those numbers. 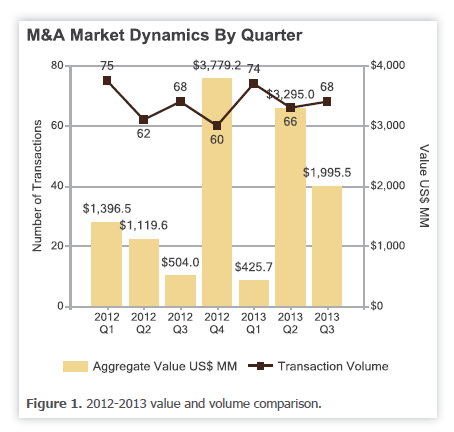