The number of mergers and acquisitions in the education industry climbed from 2012 to 2013, with many of the biggest deals taking place outside the United States, a new analysis shows.

A number of recent reports have shown or predicted a strong and growing demand for various educational products and services in markets such as Latin America, and the new, year-end report on transactions published by Berkery Noyes would seem to reinforce that portrait.

“The big education players are acquiring to help manage the transition from print to digital,” Peter Yoon, managing director of Berkery Noyes’ education group, said in an interview. He said they’re also moving to “strengthen their presence in emerging markets.”

Nine of the top 10 highest-value transactions last year occurred abroad, according to Berkery Noyes, a New York-based investment bank. One of those transations was Pearson’s acquisition of Grupo Multi Holding, an English-language training company based in Brazil, for $829 million in U.S. dollars. Pearson, a mammoth education corporation headquartered in London, was the most active company involved in education acquistions in 2013, Berkery Noyes found.

Brazil’s status, in particular, as a center for dealmaking is probably not surprising, giving what some analysts see as a rising demand for mobile devices and other educational technology there.

“This is a continuation of [that] existing trend,” Yoon said.

All told, the total value of transactions in 2013 surged to $10 billion, up 27 percent over 2012. The total number of transactions during that period also climbed, from 274 to 295 mergers and acquistions. Berkery Noyes tracked 849 education-related transactions between 2011 and 2013, of which 255 disclosed financial terms.

Within all the segments of the education industry, the one with the biggest increase in volume of transactions between 2012 and 2013 was “professional training and services,” according to Berkery Noyes. But the number of mergers and acquisitions in other parts of the education market also increased, including in K-12 media and technology, a sector that Yoon said includes a lot of companies focused on software and digital content.

The chart below provides a fuller desciption of the education dealmaking underway over the past few years: 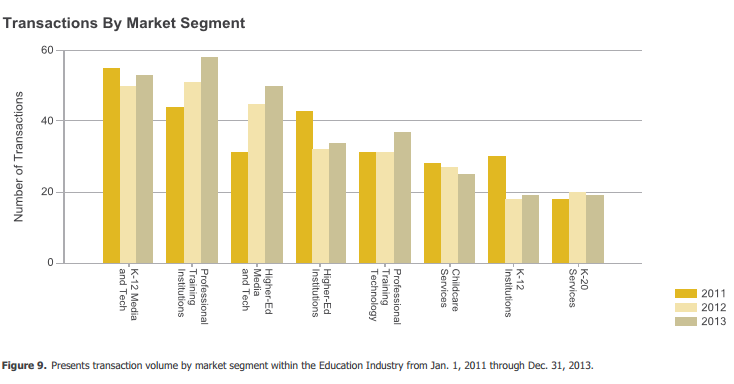 One thought on “Many of the Biggest Education Deals Playing Out Overseas, Report Finds”