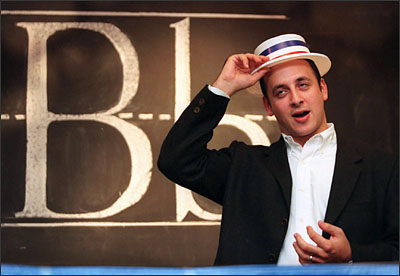 Blackboard Inc., the educational software giant prevalent in both K-12 and higher education, announced today that its chief executive officer, Michael Chasen, will step down in December. Chasen is one of Blackboard’s original co-founders; and the only one still involved in the company’s day-to-day operations.

Blackboard’s larger business is likely higher education, but it’s used in K-12 classrooms as well, offering a wide breadth of services, including classroom-management software, collaborative-learning tools, and data-management services. Chasen originally co-founded the company with Matthew Pittinsky, who were both employees with KPMG Consulting’s higher education practice. Soon after launching, the company merged with another small startup, CourseInfo.

“While it has been a great privilege to lead the company for so long, the board of directors and I have decided that now is the right time to bring on a new CEO to help the company take the next steps to carry this vision forward,” Chasen wrote in a blog post.

Since being purchased in July 2011 for $1.6 billion by private-equity firm Providence Equity Partners, Blackboard, based in Washington, D.C., has been through a series of dramatic changes, perhaps culminating in Chasen’s exit.

In February, William Raduchel stepped down from Blackboard’s board of directors citing disagreements with the company’s direction. In March, the company surprised the education-technology world by acquiring Moodlerooms and NetSpot, two companies that built learning-management systems and provided services around the open-source (free and open to outside developers) Moodle software. Both of those companies were seen as competitors to Blackboard, which was not viewed as being friendly to the open-source software community.

Chasen’s replacement is Jay Bhatt, the president and CEO of Progress Software, a $2 billion publicly traded company that provides management software and training services to help companies with their technological infrastructure. Before joining Progress last year, Bhatt was a senior vice president at Autodesk Inc., a 3-D design software company. A search for a new CEO has been “underway for some time,” though Bhatt only announced his departure to Progress about a week ago, said Matthew Maurer, a Blackboard spokesman. Chasen had agreed to stay on for at least one year after the acquisition by Providence Equity Partners, Maurer said.

It’s hard to read too much into Bhatt’s hiring, but it seems to be another step toward Blackboard becoming a company that helps schools implement a wide range of software products, rather than a company selling its own software products to schools.

“This is simultaneously investing in multiple products, rather than thinking any one approach is going to do,” Blackboard Chief Technology Officer Ray Henderson told me in March. (It also seems Promethean World, the interactive whiteboard company, is probably headed in that direction too.)

In a blog post Henderson explained the move, though offered few details about how Blackboard’s direction could change under new leadership. He lauded Chasen’s tenure, during which Blackboard went public in 2004 (valued at $400 million), made several acquisitions of its own, (including control of Edline, a K-12 technology company), and became one of the first education technology startups to grow into a large corporation.

But that tenure also saw increased competition in the LMS market, with many new players, like Instructure and Desire2Learn, and older standbys, like Pearson, entering the fray (my colleague Ian Quillen wrote about the changing LMS market a few months ago). Last month, Desire2Learn announced an $80 million round of venture capital investment.

Henderson noted that although Bhatt doesn’t have education experience, he has experience in mergers and acquisition and managing large product portfolios.

“In business terms he helped create a company that’s much larger than Blackboard, and more like what we’ll be in the next decade,” Henderson wrote.

One thought on “Blackboard Inc. CEO to Step Down”