If all students achieved a minimum level of basic skills, their increased earnings as adults would repay the entire investment in K-12 education, according to a study by two economists.

Better basic skills would translate into higher lifetime earnings for the students, according to Eric Hanushek, a senior fellow at the Hoover Institution of Stanford University, and Ludger Woessmann, an economics professor at the University of Munich, in Germany. In fact, educating all U.S. students to reach the minimum level eventually would add $28 trillion in additional income over 80 years to the country’s economy, they calculated.

“That’s probably a considerable underestimate of the value of [education] reforms,” said Hanushek, whose work with Woessman was published in a report, “Universal Basic Skills: What Countries Stand to Gain,” which was released in May by the Organization of Economic Cooperation and Development, or OECD. 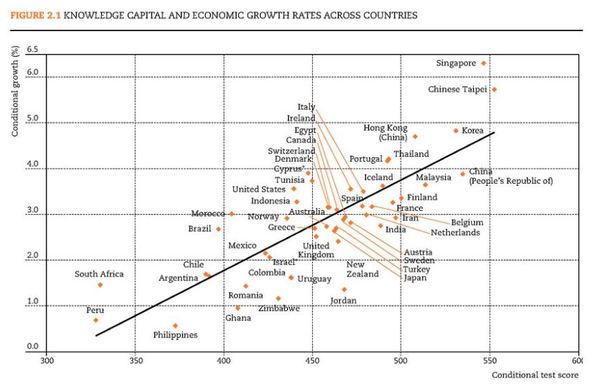 The chart above plots countries’ educational performance on an international test, as it relates to their economic growth. The United States has “managed to do somewhat better than expected [in the economy], according to our test scores,” Hanushek noted, pointing to its positioning above the line. “But we also believe that we should not count on these advantages holding in the future.”

Woessmann and Hanushek analyzed data from the 2013 Program for International Student Assessment, or PISA, tests, comparing the scores of students from 76 countries for their report.  One finding of the study was that 24 percent of 15-year-olds in the United States do not successfully complete the basic “Level 1” tasks for PISA.

In a video about their research, Hanushek posed this question as an example of a Level 1 task:

“I flew from California to Washington last week. My ticket cost $1,200. The exchange rate between the dollar and the euro is 1 to 1.1. How much did my ticket cost in euros?”

To meet the requirements for Level 1, a 15-year-old should be able to answer this and similar questions corresponding to the functional literacy skills needed to participate in the economy, according to the researchers. In Mexico, 60 percent of 15-year-olds cannot achieve Level 1 basic skills, he said.

The business of parsing international test scores can be a controversial one, with trained observers taking different views of the same data. In this case, the economists focused on access and quality of education, after a previous study showed that simply providing more education to students didn’t budge the performance needle.

Hanushek and Woessmann based this inquiry on their previous research comparing the relationship between economic growth and student test scores. They weighted current factors more heavily than those they projected into the future, and compared future gains in the economy to growth that would occur even if no improvements in education occurred, he said.

These calculations indicated that gains in basic skills would add 3.3 percent to the U.S. gross domestic product, which is the sum of the value of all goods and services produced in a country over a specific time. “That’s close to what we spend every year on K-12 education,” Hanushek said.

The study was completed in preparation for UNESCO’s World Education Forum gathering in South Korea last month, where global development goals were discussed for the next 15 years by representatives of the United Nations and the United Nations Educational, Scientific, and Cultural Organization. It follows on the 2000 millennium “education for all” goals, which included providing an 8th or 9th grade education for everyone by 2015. “Just like NCLB, we’re at 2015 and not everybody’s getting an 8th or 9th grade education,” said Hanushek in a phone interview, referring to the goal of the 2001 No Child Left Behind Act, which aimed for students to reach proficiency in grade-level math and reading by 2014.

Now, the groups are focusing on providing an equitable and inclusive quality education and lifelong learning for all by 2030. Those goals, and the objectives within them, will be ratified in September. Hanushek expects the final draft to include a specific mention of “measurable standards for quality.”

The most useful reforms, in the researchers’ opinion, include improving teacher quality, and having a good accountability system, Hanushek said. Other reforms Hanushek endorsed would involve establishing a system of performance-based pay for teachers, and giving parents more choice about the schools their children attend.

“What we know about each of these reforms is that none is the silver bullet, but all—according to past evidence—help and lead in the right direction,” he said.

Hanushek said PISA is a “very useful test” because it can be used to compare and contrast students’ skills across countires.

However, many Americans are “accustomed to thinking we’re better than everybody in everything,” said Hanushek. That complacency is challenged by the PISA results, which show that other countries are ahead of the United States. according to the researcher. In the long run, “we’re going to have to live off the quality of our human capital—our students—as much as anyone else,” he said.

To some extent, the fact that U.S. economic institutions reward top performers has masked the weakness of our educational system, Hanushek said. “But we’re just not doing that well in educating” our young people, he added, predicting that even children educated in Silicon Valley will not be well suited to competing for jobs there when they graduate from college.

“I’m willing to absolve the schools of the blame” for how students fare, he said, “but at the same time, I think schools are the only instrument we have to improve.”

Their report concludes that improved “knowledge capital” by gaining minimum basic skills would result in a host of improvements, including better health care, the development of new technologies that are sustainable, and a reduction in poverty, among others.

Graph: “Use of Skills at Work” is a slide from Universal Basic Skills: What Countries Stand to Gain from OECD Education