One of the nation’s most prominent business organizations has issued an unusual request for proposals meant to direct corporate backing toward the scaling up of successful education programs.

The Business Roundtable, a Washington-based association of executives of large companies, will judge applicants and make competitive awards to projects and ideas backed by research and focused on issues such as improved teacher education, technology, literacy, and college preparation.

This is the first time the roundtable has issued this type of request for proposals, said Dane Linn, the organization’s vice president for education and workforce issues. Eligible applicants could be individual state education agencies or school districts, nonprofits, partnerships of organizations, and other interested parties, he said.

Proposals will be judged by a panel of five independent experts, and the winners—there will be no more than five—will then be recommended to companies that are part of the roundtable for their financial support. Presumably, that backing could be substantial: The organization estimates that its members represent companies with more than $7 trillion in annual revenues.

All proposals are expected to support a series of broad education goals, such as improving the teaching of math- and science-related subjects, and the implementation of the Common Core State Standards. (Linn was a key player in the development of the common standards, when he held a previous position at the National Governors Association.)

The applicants will be scored on a variety of factors, including the potential their programs to be replicated and scaled up, and the evidence behind them. (See the full list of criteria, below.)

“This isn’t just a pot luck, where you can submit a proposal on any issue,” Linn said. “We want the best ideas from proven programs.”

Member companies will decide on their own which of the winning applicants to fund, based on those companies’ priorities in supporting education issues.

Proposals are due by May 31, will be judged over the summer, and winners will be notified in late August, Linn said. 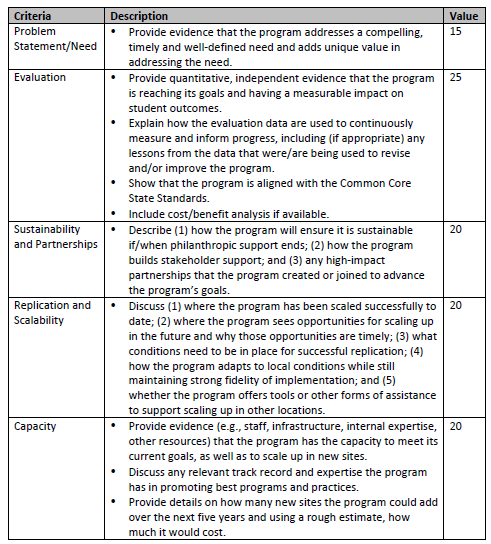