Adding an apprenticeship approach to K-12 and higher education can help close the massive skills gap in the U.S., according to a panel of CEOs, two U.S. senators and a Trump administration official, in a discussion sponsored by the Business Roundtable here today.

Companies in a survey by the organization are spending $4.5 billion annually to tackle the skills gap, according to a report released today by the group. A companion publication released by the roundtable detailed specific approaches and projects undertaken by 64 major corporations to address the shortage of workers with skills to fill jobs in different industries.

“We need to truly remove the unnecessary firewall between government and schools, and government and business,” said Wes Bush, chairman, CEO and president of Northrop Grumman Corp. and chair of the Business Roundtable’s education and workforce committee.

R. Alexander Acosta, the U.S. Secretary of Labor, echoed the findings. “Education is not focusing on the skills demanded by today’s workforce as well as they could or should,” said the secretary, who held up the example of doctors’ training in medical schools as a model where two years of classroom training are followed by internships.

“We in the federal government cannot define what an apprentice is in any one particular industry,” he said, adding that government can “help set up a blind date, if need be, but ultimately relationships need to be [forged] in the private sector.”

Public-private partnerships are key to bridging the divide between what skills companies need in the jobs they have available, and what students learn in school or college. The survey of 177 Business Roundtable members—which about half responded to—showed how these partnerships take shape, as the following slide illustrates. 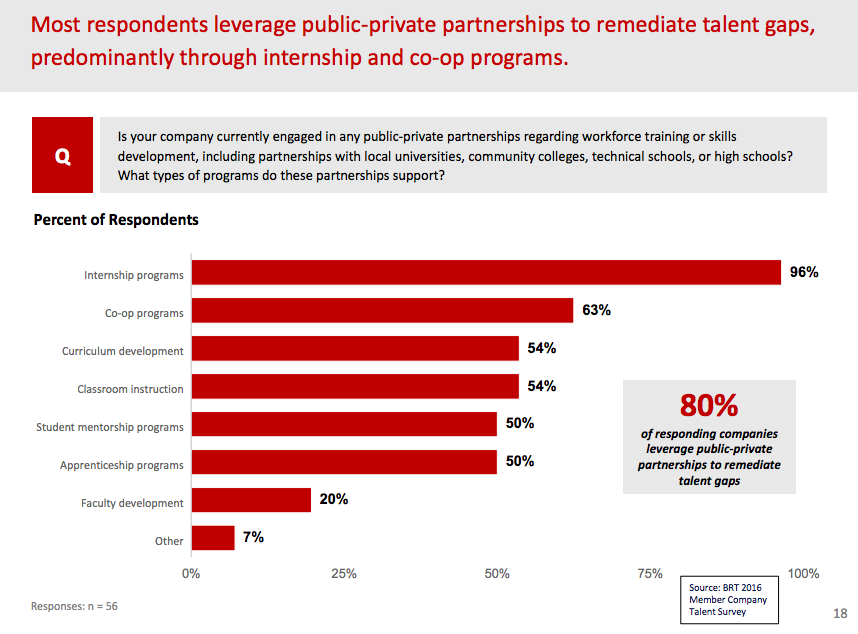 The following graph shows how many job openings are available among respondents to the Business Roundtable survey. Nationally, the labor secretary said there are 6.9 million people unemployed, and about 6 million jobs available in the U.S., according to data released earlier this week. 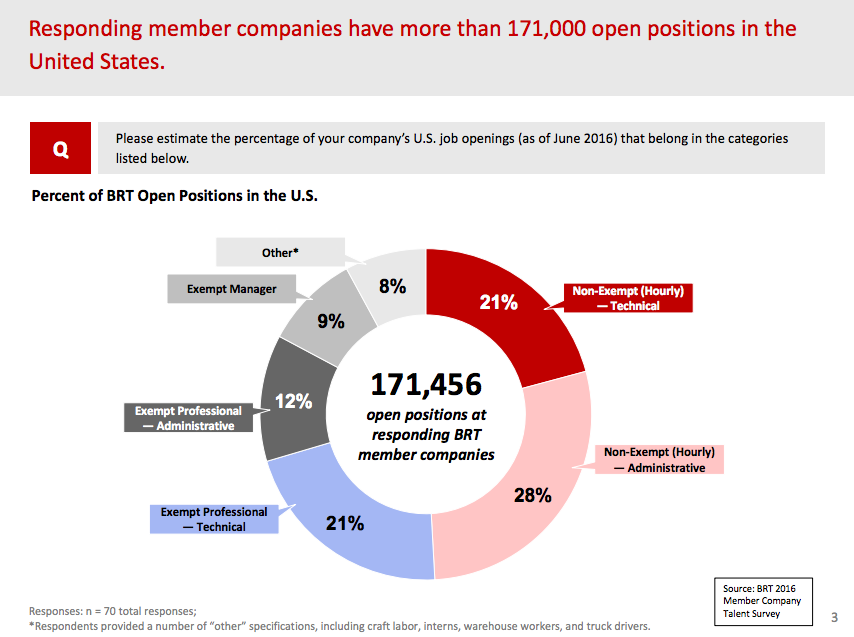 U.S. Senator Michael Bennet, a Democrat from Colorado who was once superintendent of schools in Denver, said, “We have done an unbelievable job in this country of making math and science as boring as possible” for high school students. One thing businesses can do is to make students understand how compelling these areas can be when applied on the job, he said.

Bennet also invited the businesses to help schools in another way. “You have school districts all over America who have no idea how to run a human resources department,” he said. “If you could actually teach a school district to do HR or IT, or other things that are systems issues that are done so poorly all over America,” that would be a major benefit to K-12 education, he said.

Companies have become involved in curriculum development programs for secondary and postsecondary schools to address the skills gap, the Business Roundtable’s study shows. When companies take on that work, they are less likely to view their company’s skills shortages as problematic or very problematic, the survey found.

Ginni Rometty, the president and CEO of IBM Corp., talked about her company’s focus on promoting “new collar” jobs, via an expansion of partnerships with community colleges to advance students’ qualifications for technology openings. That terminology is designed to remove these tech skills from being labeled as “blue collar” or “white collar.”

Jamie Dimon, the chairman and CEO of JPMorgan Chase & Co., lamented that 70 percent of young people from the age of 17 to 24 are ineligible for military service because they lack sufficient education or have health issues. Half of inner-city school kids don’t graduate from high school, he said. And participation in the workforce has decreased 10 percent among men aged 25 to 55, in large part because they failed to create and sustain a livelihood when they graduated.

“That was the point of an education,” said Dimon. “You learn about life and end up with a livelihood.”

See my colleague Catherine Gewertz’s High School & Beyond blog for further coverage of this event.