The ISTE annual conference has long served as a nonstop networking hub for educators—and for the ed-tech businesses desperate to impress them.

But the 2016 version of the event on Sunday also featured an effort to try to help U.S.-based digital companies gain ground with another audience—school officials and government officials in foreign countries.

The U.S. Commercial Service, a part of the Department of Commerce, held a small forum designed to introduce American ed-tech providers attending ISTE to a handful of foreign markets, a gathering meant to offer insights on the landscape for selling digital products in those countries.

It’s a mission that is a priority for the commercial service, and it hopes to continue to use ISTE to sharpen U.S. ed-tech providers’ ambitions abroad.

U.S. representatives from the commercial service based in Spain, Turkey, and the United Arab Emirates laid out school landscape and digital priorities in those countries. Commercial service officials from China and Peru were also on hand.

The commercial service has come to see ISTE as a prime opportunity to reach U.S. ed-tech providers, said William Toerpe, an international trade specialist and ed-tech team leader who helped spearhead the event.

The goal is to give companies “an understanding of some of the challenges U.S. education companies will face as they enter particular markets, and where opportunities exist,” Toerpe said at the event. “It’s about working one-on-one with these companies to identify the hurdles they face.”

Representatives of the commercial service offered details on how ed-tech policy is shaped in the countries where they work. In Spain, much of the power is held by regional governments; in the UAE, the ministry of education is a major player, but there’s a long list of independent private schools, which are also looking to invest in ed-tech, a representative explained.

The service’s staff also brought information on how government policies, population changes, and overall education needs are creating shifting demands for digital products. In Turkey, for instance, there’s a strong interest in improving teachers’ mastery of technology, and bringing them up to par with their students’ level of digital skill, said Perim Akguner, a U.S. commercial service representative working in that country.

There’s also rising demand from Turkish schools for coding and computer science education, and for tech-based assistance for students with special needs, she explained.

One of the U.S. company officials who came looking for information on foreign markets was Kevin McFarland, the co-founder of Formative, a company he launched as a graduate student. 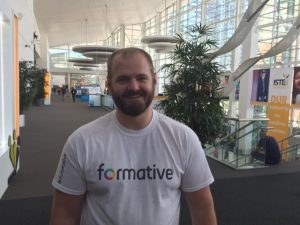 McFarland (pictured at right) says Formative has substantial groups of users in about a dozen countries. Some of those users are in the UAE, and he went to the session curious to learn more about that country’s education system.

He came away intrigued by Turkey’s efforts to bring more technology into classrooms, and he sees a potential strategy for doing business in that country.

“It’s somewhere I think we might want to focus our attention,” he said, “now that we understand their goals.”