An analysis of contracting for common core-related materials shows a limited number of states accounted for the 600 opportunities in 2012 and 2013, with many other states showing no activity so far, according to Paul Irby, a market analyst at Onvia, a Seattle-based government business intelligence company.

Eleven states made at least 10 common core-related contracting awards in the last two years, while 20 states have had no awards, or only one, according to Onvia’s review of bids, requests for proposal (RFPs), and awarded contracts in its proprietary database of government contracts.

Here’s how that unevenness looks on a map:

The orange states on this map had at least 10 common core project opportunities in the two years spanning 2012 and 2013, with major spending in areas like re-tooling a curriculum and professional development, according to the “Market Analysis: How Common Core is Shaping Public Sector Education Contracts” report.

Interestingly, Oklahoma, which recently repealed the common core, is in the category of states with 10 or more project opportunities between 2012 and 2013. And North Carolina, where the governor signed a bill to review the standards, is in the “five to nine” project opportunity category.

“We definitely know there’s a lot of political controversy about common core, but our approach was not to focus on the politics, but on the contracting trends data,” said Irby in a phone interview.

Spending Expected to Pick Up

“It seems like the majority of spending will happen between right now, and next year, when testing formally starts,” said Irby. And the pressure’s on. “There are all these states that haven’t even started,” he added.

Here’s how Onvia calculates that the contracts break down: 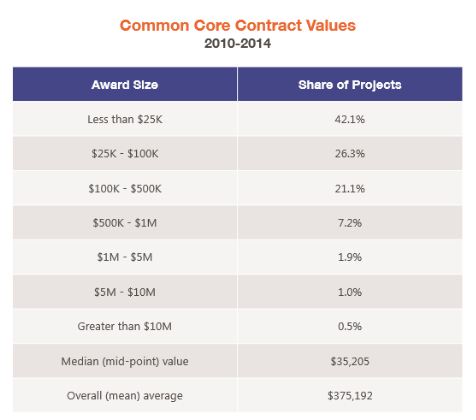 Examples of contracts in these areas include:

Few contracts showed up in the testing/assessment category, the report indicated. An Education Week analysis showed that the national landscape is fragmenting as states plan for common core testing, so this part of the marketplace is still a question mark. Education Week also explored the common core-influenced market, and the complexities of districts’ and states’ spending decisions as they implement the standards.