The number of mergers and acquisitions in the education industry has been on the rise, and much of that activity, perhaps not surprisingly, is “strategic” purchasing by companies looking to expand their reach or otherwise diversify what they do, a new analysis finds.

Overall, there have been 573 mergers and acquisitions in the education industry over the past two years, and the number of transactions rose by 8 percent from 2012 to 2013, according to the independent investment bank Berkery Noyes, which studied dealmaking over that period.

What did those buyers have in mind? Berkery Noyes says that 78 percent of the deals in 2013, by transaction volume, were strategic transactions, and that number increased from 70 percent a year earlier.

Strategic buying generally refers to buying made by companies of other companies operating in the same sector, with the goal of increasing their market share, filling in a gap in their current operations, or meeting other needs. Big acquistions by Pearson in cloud-based analytics and McGraw-Hill Education in assessment are offered as examples, in Berkery Noyes’ research.

The other 22 percent of transaction volume in 2013 was made up of financial transactions, mostly private-equity buyers interested in making leveraged buyouts or other deals, said Peter Yoon, the managing director of education for Berkery Noyes. TPG Capital’s acquisition of TSL education, a digital education publisher, was cited as the largest private-equity transaction in the education industry in 2013.

Here’s Berkery Noyes’ breakdown of the type of mergers and acquisitions playing out in 2013: 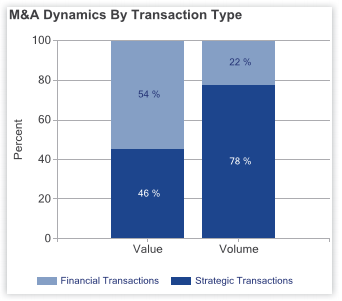