But language included in the sweeping, 400-page-plus law also lays out another, less expected goal: informing students and parents about “the harms of copyright piracy.”

Wording that urges school officials and parents to explain the importance of preventing the illicit use of copyrighted material is improbably found in a couple sections of the law, alongside more predictable school policy language on literacy, professional development, and student achievement.

Which raises the obvious question: How did it get in there?

It turns out the wording can be traced to the insertion of an amendment to the massive statute made at the urging of a coalition of film, music, and publishing industry organizations, which have fought for years to establish stronger copyright protections.

The language reflects the longstanding interest among those influential lobbies in preventing online files, images, and print and digital resources from being copied and shared without permission. Their worries extend to K-12 districts, where some industry officials see the practice as widespread, and to students’ online activities away from school.

An amendment to ESSA including the copyright piracy language was introduced by Congressman Hakeem Jeffries, a Democrat from New York, and agreed to by legislative committee on its way to being included in the Republican-led drafting of the law. 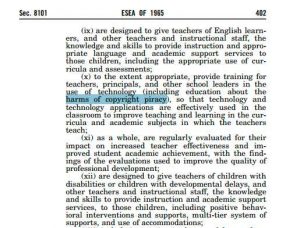 Jeffries argued that the language would encourage parents and students to learn to respect the rules of intellectual property and protect the work of artists and other creators who do not want their work illicitly shared.

“In the classroom, children are currently taught that plagiarism is an ethical violation of academic honesty,” Jeffries said, according to a record of his remarks introducing the measure. “This amendment will hopefully facilitate the extension of this discussion into the digital era.”

Policymakers should help schools and parents grasp “the unforeseen impact [of] copyright piracy,” the lawmaker added, and “the importance of intellectual property and its connection, of course, to the American economy.”

Getting Word to Teachers, Parents

Jeffries’ office declined requests to comment on his role in drafting the amendment.

A number of observers cast doubts on whether the language in question was specific or prescriptive enough to have much of an impact on schools, or students’ understanding of copyright, one way or another.

In one section of the law, a passage says that districts and schools “shall” provide training and materials focused on using technology effectively—and about the harms of copyright piracy.

Another section says that districts may use grants for professional development to help teachers weave technology into curriculum and instruction – including “education about the harms of copyright piracy.”

Organizations who pressed for inclusion of the language say it was not aimed at blocking teachers’ or students’ sharing of education materials such as “open” education resources, which have taken hold in many districts in recent years. Open resources are generally defined as materials that either exist in the public domain, or are created on licenses that allow teachers and students to freely share and modify them.

A number of backers of open resources said they did not see any specific harm to the use of those materials from the ESSA language. (And in fact, language in other sections of the law specifically encourages the use of open materials.)

Cable Green, the director of open education for Creative Commons, an organization that issues open licenses, said his group favors educational efforts to explain the implications of both copyright and open licensing in schools. 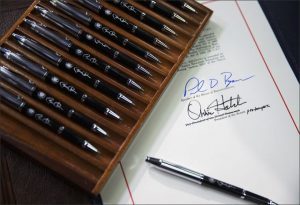 But he argued that too often, copyright education is merely about “telling teachers and students that they shouldn’t illegally download a song or the latest Warner Brothers film,” Green said in an e-mail.

The film and music industries’ strategy ends up “raising a specter of infringement and piracy wherever they can, to feed a culture of fear around engaging in digital content,” he said.

But representatives from the entertainment and publishing sectors say the ESSA language will simply encourage school officials to understand the rules around using and sharing print and online materials.

“We strongly believe in the importance of digital citizenship education, and specifically the often-overlooked teaching of digital ethics,” said Brett Williams, the senior vice president of public affairs for CreativeFuture, an organization that backed the language, in an e-mailed statement.

“Young people are creating, sharing, and working online more than ever before. Knowing their rights and responsibilities as creators and consumers is an essential 21st century skill.”

CreativeFuture, a nonprofit, says it represents more than 500 companies and organizations across the film, television, music, photography, and book publishing industries.

In introducing the language of the amendment at a congressional hearing in February of 2015, Rep. Jeffries specifically cited support from “a variety of bipartisan stakeholders,” including the Copyright Alliance, the Recording Industry Association of America, the National Music Publishers Association, the Songwriters Guild of America, the Authors Guild, and the Association of American Publishers, which of all the organizations plays the most direct role in K-12 policy and advocacy.

Education publishers share the film and music industries’ interest in supporting copyright protections and setting parameters around “fair use” of those materials, and often works closely with those groups, said Jay Diskey, executive director of the pre-K-12 learning group of the Association of American Publishers. Safeguarding those principles is a “core mission” of the publishers’ organization, he said.

The flouting of copyright policy is “unfortunately commonplace” in many districts, argued Diskey, and it has a real impact on the work of publishers.

The most common violation is excessive copying of K-12 texts, though the behavior can extend to video, online, and other works, he said. Diskey said his organization hears of parents being given lists of supplies to pick up for school that include reams of blank paper that students should bring with them, for the purposes of copying.

The ESSA language on piracy does not mandate school behavior or penalize them, Diskey said, but is instead “purely educational,” and “designed to inform our educators and students about how they should handle trade works.”

Doug Levin, the president of a consulting organization EdTech Strategies, said he supports introducing students to rules surrounding intellectual property and copyright. But he also believes that K-12 schools are generally more aware of copyright rules and more committed to following them than industry groups acknowledge.

The main thrust of the ESSA language on copyright piracy, Levin speculated, is not designed to change behavior in school buildings at all, but rather to discourage illicit copying of music, movies and games in home environments—which amounts to “much bigger business than educational publishing.”

Too often industry groups have gone over the top in casting copyright piracy as “the scourge of everything,” said Levin, the former executive director of the State Educational Technology Directors Association.

Practically speaking, Levin didn’t think there’s any way to enforce the ESSA language on copyright piracy, even if anyone wanted to. But that doesn’t mean it belongs in the law to begin with, he said.

“It’s a very powerful lobby, and they were successful in getting it into the bill,” he said, but “it feels a little like a crass attempt to effect a policy aim through schools.”

Organizations worried about copyright transgressions have adopted other strategies to encourage the public and educators to take the issue seriously.

A variety of groups, for instance, supported the creation of iKeepSafe, a curriculum designed to explain copyright principles to K-12 audiences and others.

The goal of the curriculum was to present copyright to students not just by spelling out behavior they should avoid, but also by laying out their own “rights and responsibilities” as potential creators, said Marsali Hancock, the former CEO of iKeepSafe, in an interview.

Students need help in understanding how copyright rules apply to the print and online resources they use every day—and what the rules are outside of K-12, such as in workplace settings, Hancock said. When students leaving K-12 systems lack that knowledge, she said, they put themselves and their employers at risk.

Many students today are “absolutely clueless about how to navigate their own rights as creators, and use other people’s creative content,” Hancock said. Children and educators absolutely need to understand what it takes to use digital content to thrive in a digital environment.”

2 thoughts on “How Did ‘Copyright Piracy’ Language Get Into ESSA, the K-12 Law?”