Frank Ferguson, chairman and co-founder of Curriculum Associates, is being inducted into the Educational Publishing Hall of Fame tonight.

It’s an honor bestowed by the Association of American Publishers PreK-12 Learning Group on the 88-year-old Ferguson, who reports almost daily to the North Billerica, Mass.-based education business that he has been leading—in one form or another—since 1976. That’s the year he became the company’s president after serving as president of the BOSE Corporation for seven years. 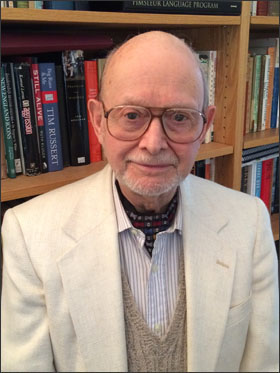 Rob Waldron, the company’s CEO since 2009, said Ferguson is known not just for his decades of contributions to education, but for taking a long-term view of his company’s future by putting it into a perpetual trust. That means that Ferguson will never “cash in” by selling the company, although Waldron said Ferguson has had offers of up to $200 million for it. Rather, two-thirds of the company’s profits will go to educational institutions, in perpetuity. “It’s so unusual for someone to give their company away,” said Waldron. “That was an incredible gift.”

Education Week interviewed Ferguson, as he prepared to give his acceptance speech tonight. Here are highlights of that conversation:

Where did you get the idea to put your company into a trust?

I’ve been all about service of one kind or another all of my life. If anything, I looked at the National Geographic, realizing they’ve been going for over 100 years, and they continue to plow on, decade after decade. It’s still true to its mission of the exploration of geography. Why not have an education company that, if you squinted a little, looked the same, pursuing our mission the same way?

How does this align with your personal philosophy?

One of the people who influenced me was Martin Selgiman, who wrote the book, “Authentic Happiness.” He said you have to … find something you can give yourself to 100 percent, because in the end, happiness has much more to do with giving than getting. I read that 15 or 20 years ago, and I followed it immediately.

What does winning this award mean to you?

The honest answer is I don’t think I deserve it. I have had a passion for education for a very long time.  Maybe some of that shows through. What Curriculum Associates has accomplished has been a result of the work of some very, very talented people over a very long period of time. If anything, it’s getting better and better under Rob’s leadership. I can’t in any way take a lot of credit for the accomplishments because that really is the result of the team.

What kind of work are you focusing on with the company now?

I’m spending more time on our international operation. We’re starting to get usage in the Philippines, Argentina, Mexico, Hong Kong, Japan. Over the next several years, I expect to see that part of the business rise.

What was your education like? Did you go to public schools?

Yes. I grew up in Ames, Iowa. I went to public schools there and graduated in the middle of my class, maybe even below the middle. I wasn’t working very hard at that point. I went off to World War II, when the war was pretty much over, and came back to Ames. I went to Iowa State, majored in journalism … then made 15-mm. educational films for a number of years. Then I thought, ‘What I really should have done is to have gone to business school.” So I went to the Sloan School at MIT, and earned an MBA there in 1959.

What continues to motivate you?

One of the things that really excites me is the number of students we’re touching. On a typical day, half a million students sign into the iReady program, so it’s our ability to change what’s happening in the classroom by providing tools that make data-driven, differentiated instruction possible.