A new analysis examines the acute appetite for private education in the Persian Gulf region, predicting that the market will double from $13 billion to $26 billion over the next five years.

That surge in demand is fueled by several factors, including loosening government restrictions on private schools, rising demands from expatriate and families and native-born citizens, and the population growth among young people.

The report, “Where to Invest Now in GCC Private Education,” was released by the Boston Consulting Group and focuses on six countries: the United Arab Emirates, Saudi Arabia, Qatar, Kuwait, Oman, and Bahrain.

The hunger for private education in some of those countries is well documented. In the UAE, for instance, an estimated 80 percent of the workforce is composed of expatriates, and their demands have helped shape a market in which private school operators jostle with each other to attract students and teaching talent.

The report identifies the UAE as a mature market, and says its size will swell from $4.4 billion in 2017 to $7.1 billion in 2023. The government in the country has made improving education a priority, and regulatory bodies seek to offer parents information on private schools’ quality. (See EdWeek Market Brief’s recent story on the UAE’s burgeoning private school landscape.)

On the whole, the UAE is the most “competitive and complex” private school market in the region, said C. Patrick Erker, a project leader at the consulting group and one of the report’s authors, in an interview.

Yet the biggest share of growth in the region will occur in the UAE’s neighbor to the west, Saudi Arabia, where the market will expand from $5 billion to $11 billion over the next five years, the report says.

The roots of that expansion are based partly in shifting government policies. Saudi Arabia’s Ministry of Education has launched an ambitious, long-term plan to improve education across the country, and the government has created incentives for private school growth as part of that vision, say the authors from the Boston Consulting Group, which consults clients around the world.

In addition, Ahlia schools — private institutions that adhere to the national curriculum — are now being allowed to weave in an array of international curricula, extracurricular resources, and new learning materials, the authors say.

Average tuition fees vary greatly across the Gulf countries, from $4,400 in Saudi Arabia to $8,700 in the UAE emirate of Dubai. Those charges are poised to rise with demand for private schools, fueling much of the growth in the market, the report says: 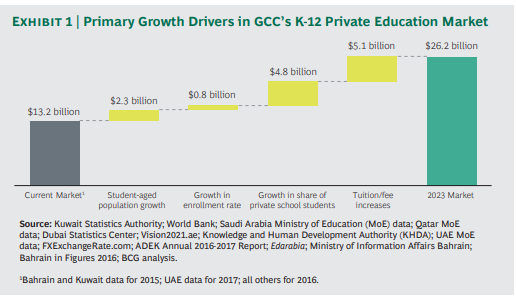 One of the takeaways from the analysis is that the private school growth across the Gulf region is opening up new opportunities for companies and institutions that operate private schools, Erker said.

The shifting market will also stir new demands for products and services in technology, curriculum, and other areas, he predicted.

“A lot of providers will benefit from the rising demand for private education,” Erker said. “It looks like a region that is eager to test new ideas.”

Other markets in the Gulf region are growing, albeit from smaller starting points, and with more volatility and varying degrees of government restriction, the reports says.