The global market for learning games and simulations is growing and likely to continue to expand over the next few years, driven in large part by the booming use of mobile technologies, according to a recent analysis.

Revenues for game-based learning in 2012 were $1.5 billion, in U.S. dollars, and will grow to $2.3 billion by 2017, an 8 percent increase based on the five-year compound annual growth rate, says Ambient Insight, a market research company that has reported extensively on worldwide trends in education purchasing.

The market for simulation-focused learning, meanwhile, is even bigger—nearly $2.4 billion last year. And it is projected to grow by 23 percent, to $6.6 billion in 2017, also based on the compound annual growth rate, which is meant to calculate the growth of investment over time. The estimates for games and simulations do not include projected revenues from hardware.

What’s the difference between learning tools that rely on games, as opposed to those based in simulations?

Ambient describes game-based learning as the transfer of knowledge through “gameplay,” meaning some type of competition in which users attempt to outperform others or challenge themselves. It includes a reward-and-penalty system that works as a form of assessment. Game-based learning products have specific pedagogical goals.

Simulation-based learning allows users to simulate various physical and environmental conditions, processes, and situations, through technology and other means, with the goal of teaching them to accomplish a task. (The definitions I’ve seen vary quite a bit.)

Currently, the top-buying nations of education-focused games are the United States, Japan, South Korea, China, and India, in that order, Ambient says.

But by 2017, the market will shift. The biggest buyers will be China, the United States, India, Indonesia, and Brazil, the report predicts. See a breakdown of the country-by-country market for games, below.

Ambient unveiled its projections on games and simulations last month at the Serious Play Conference, a gathering of developers, designers, analysts, consultants and others immersed in games, simulations, and virtual worlds. The company has made its presentation at the event available online.

The analysis cites a number of factoids meant to lend context to their findings on the strength of the market for games.

As of this year, Apple has app stores in 155 countries. Paid Android apps are now available in 134 countries, as of March of this year. And Amazon has stores in operation in seven countries—but will be expanding to over 200 countries by 2013, according to Ambient.

The report cites another intriguing factor driving growth in learning games and simulations abroad. In some countries—presumably developing ones—credit card usage is still pretty rare. But telecommunications providers and app stores in Latin America, Africa, and Asia have gotten around that by creating direct-billing agreements, in which customers get charged for apps on their phone bills. 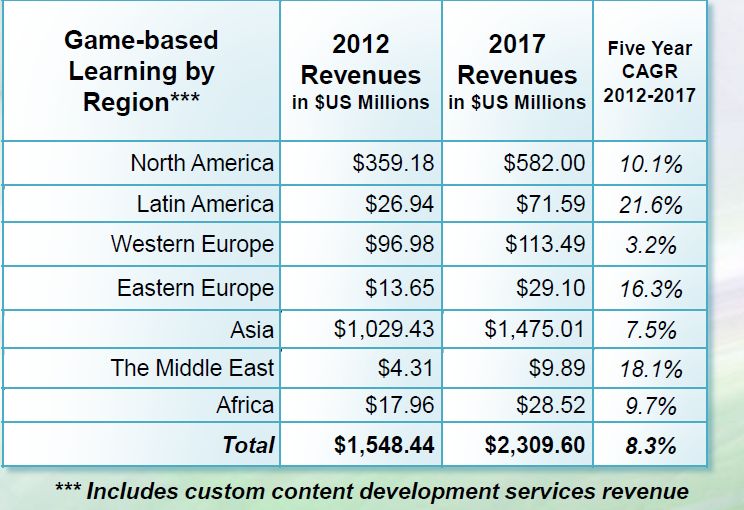 16 thoughts on “Global Demand for Game-Based Learning, Simulations on the Rise”