The people who bring us Mickey Mouse, Minnie, and Goofy introduced “Disney Imagicademy” today, a technology-based initiative with a curriculum for 3- to 8-year-olds, and support materials for their parents.

Schools, however, need not apply. 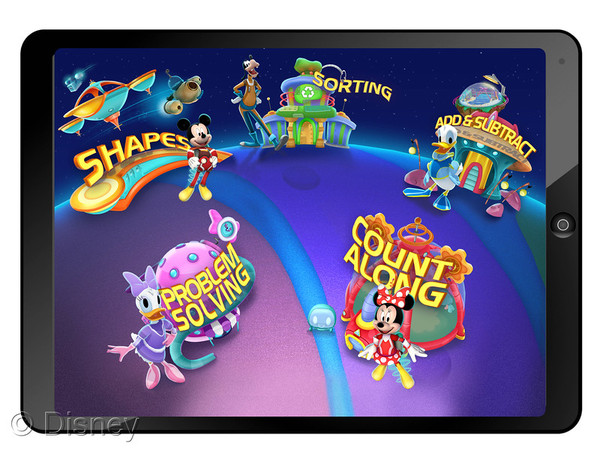 The educational roll-out integrates Disney’s popular characters into apps for children with guidance for parents, and future plans for books and learning toys as part of the multi-platform product. The focus is on encouraging children to learn by creating, doing, and making.

Disney Publishing Worldwide, a Glendale, Calif.-based publisher of children’s books and apps, launched the initiative at an event in New York.

On Dec. 11, the first of the 30 iPad-only apps will be sold in “Mickey’s Magical Math World,” featuring five math-focused activities with names like “Mickey’s Super Rocket Shapes,” and “Minnie’s Robot Count-Along,” and “Daisy’s Bedtime Countdown.” Each app features progressive early math concepts, including counting forwards and backwards, sorting and classifying, reason and logic, among others. Each app in the bundle is priced at $4.99, or $19.99 for all of the math apps.

While Disney’s developers consulted with well-known researchers (like Douglas Clements, executive director of The Marsico Institute of Early Learning and Literacy at the University of Denver’s College of Education) in the design and testing of their learning products, the company does not plan to approach schools or teachers to buy the apps, books, or toys for their classrooms.

“Naturally, teachers are going to find [the Imagicademy] and we look forward to hearing their feedback,” said Jeff Sellinger, senior vice president and general manager of Disney Learning, in a phone interview before the launch.

But these educational products were created for children, and parents, as the primary consumers. “We heard clearly from parents that they wanted supplemental products for outside the classroom, and that there was a lack of quality and consistency” in the existing selection, he said.

In fact, the existing choices are voluminous. In 2012, the Joan Ganz Cooney Center at Sesame Workshop published a report projecting that mobile app revenues would generate $38 billion by 2015. Their “iLearnII” report analyzed the education category of Apple’s App Store, and found that more than 80 percent of the top-selling paid apps in the education category were developed for children.

The Imagicademy will eventually offer apps and products in the areas of creative arts, science, language arts, and social and emotional skills, as well as math.

“What are they really doing that’s different?,” asked Elliot Soloway, a professor of computer science at the University of Michigan, who has studied and developed digital education tools. “The challenge is creating connected experiences between the abstract and the concrete world, like taking a picture of real-world things, and making those the things that get sorted. Or, kids could be drawing objects that they take pictures of.”

Constance Steinkuehler, an associate professor of digital media at the University of Wisconsin-Madison whose research focuses on cognition and learning in games, provided feedback about the development of the apps, and beta tested them with her young children.

“This activity puts play first,” she said, noting that the “joyful activity” engages children while they learn. “In the game space, a lot of apps you’re seeing—not just in classrooms but in the so-called educational marketplace—are really a lot of practice and feedback. These are apps kids would play, whether they’re assigned or not.”

Clements’ comments in the Disney release indicate that early math experiences can help build confident learners. “Such experiences are surprisingly important to children’s development not only of mathematics topics, but of higher-order thinking skills and general success in school,” he said in the statement.

Soloway, who was on the board of a company that produced a parent dashboard for its early childhoood technology several years ago, said it didn’t work. “Parents didn’t use it,” he said.

Conversely, John Bailey, who is the vice president of policy and executive director of Digital Learning Now!, a project of the Tallahassee, Fla.-based Foundation for Excellence in Education, saw some of the beta testing of Imagicademy, and was favorably impressed. “Whenever you have the creativity and engineering expertise of Disney, and they bring that to bear on education, good things tend to happen.”

The Imagicademy “won’t replace the existing curriculum, but it’s complementary,” he said, noting that the products have been developed with the common core and other state standards in mind.

The next part of the Imagicademy being released will be a suite of apps focused on the creative arts in January. Physical products and learning toys will launch in the back-to-school 2015 season. For instance, Sellenger said, a smart Mickey and Minnie plush toy will incorporate an operating system that creates a personalized learning system “that adapts and learns with the child.” It will incorporate elements of a child’s daily routine, such as getting up in the morning, brushing teeth, stopping to read a book, and helping the child with reading comprehension.

Sellenger said Disney markets other educational products to schools through Disney Educational Productions, which focuses on K-12. “There, we bring educational films and programs” to students to help boost skills, with engaging experiences and campaigns, like a “Lincoln Learning Lab” in conjunction with the general release movie, “Lincoln.”

The full release about the Imagicademy launch is available here.

One thought on “Disney Launches ‘Imagicademy’ With Education Products, But Skips Schools”