Applicants to the federal E-rate program are seeking a significantly greater amount of broadband speed this year as their demand for online connectivity rises, a new analysis of nationwide requests for funding shows.

Funds for Learning, an Oklahoma-based company that consults schools on the E-rate, conducted a review of all requests for funding in 2014 applications submitted by schools and districts—roughly 21,000 applications in all.

Applications that sought Internet speeds of between 100 and 500 megabits per second, for instance, represented 36 percent of the pool of schools and districts in 2014, up from 29 percent in 2013, and much higher than the 15 percent who made that request five years earlier, the review found.

Similarly, requests for funding from applicants seeking up to 10 gigabits of Internet speed rose to 14 percent earlier this year, up from 11 percent in 2013 and just 5 percent a five years ago: 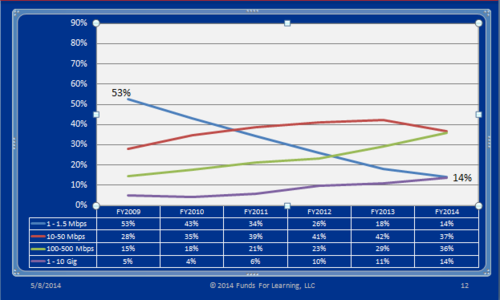 Requests from applicants seeking less-ambitious Internet speeds—50 megabits per second and below—on the other hand, fell, according to the review. (Links to Funds for Learning’s data can be found here.)

There was a time when district demands for speeds of 200 Mbps were considered “way out there,” but that need is becoming mainstream, said John Harrington, the CEO for Funds for Learning.

To put those numbers in context, a school with a 10 Mbps connection could support between three and 15 videos streaming at the same time, Harrington said. But by moving to a 100 Mpbs connection that same school site could support 30-150 simultaneously streaming videos, of the kind often used for educational purposes, he said.

Boosting schools’ Internet speed is a priority of, among others, President Barack Obama, who last year called for connecting 99 percent of the country’s students to high speed broadband—at speeds of at least 100 Mbps to and within their schools.

A separate analysis released this week showed that meeting the president’s goals would require a huge infusion of money into the E-rate program—more than $3 billion, as my colleague Ben Herold reported.

Funds for Learning submitted the data to the Federal Communications Commission, which is accepting public comments as it conducts a sweeping review of the E-rate, a program that provides discounts on telecommunications services schools and libraries, and has an annual budget of more than $2 billion. FCC Chairman Tom Wheeler has vowed to modernize the program and help schools improve the reliability and speeds of their connections, amid growing online demands.

Harrington said the result of the analysis, which does not include libraries, are in some ways not a surprise, in that they reflect schools’ efforts to keep up with the use of the myriad devices on their campuses by teachers and students.

“That takes a lot of bandwidth, and that’s the biggest driver,” Harrington said.

But the pressure to deliver online tests without glitches is also weighing on school leaders and fueling demand, he suggested. Currently, some districts are worried about having to limit Web usage during testing windows, Harrington said, an approach he likened to “electricity rationing.”

The review also found that the number of private companies providing work for certain types of E-rate services has fallen over time, as federal funding for those services has been negligible.

For instance, the number of service providers on applications for priority one E-rate requests—basically, those funding external connections to school districts—has increased by 73 percent  since 1998. But the number of service providers for priority two requests—primarily internal connections, which have received scant E-rate funding recently—plummeted by 72 percent during that time, the analysis found.

Federal officials have spoken about the importance of increasing the number of vendors offering E-rate services, to give districts more choices and keep costs down. But the data show that there has been an “exodus of service providers” in certain areas because they don’t believe projects will be funded, a void that Harrington said undermines competition.

Funds for Learning’s data also include a state-by-state breakdown of the per-student cost of all telecommunications and Internet access before schools and districts received discounts through the E-rate program. The estimates basically show the average amount that E-rate applicants say they plan to spend on ensuring connectivity to their school buildings.

While there’s not a clear pattern across states, Harrington attributed the differences in costs across states largely to the profile of their school districts. The price per-student tends to drop in larger school systems, partly because bigger districts have greater purchasing power and an ability to share fixed costs across a greater population.

Some states, obviously, have many more of those larger districts than others that are trying to provide connections to a lot of small or rural ones, like Oklahoma, or, in the most extreme case, Alaska. 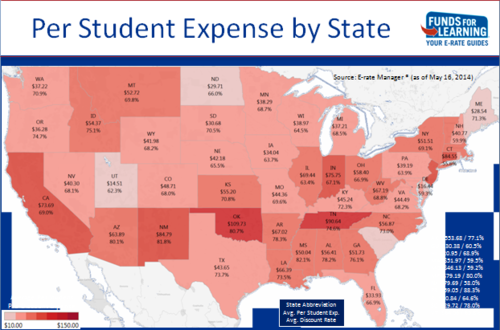 Costs for rural, remote schools and districts were much higher, at $88 per student, than they were in cites, $59, and in suburban areas, at $44 according to the analysis.