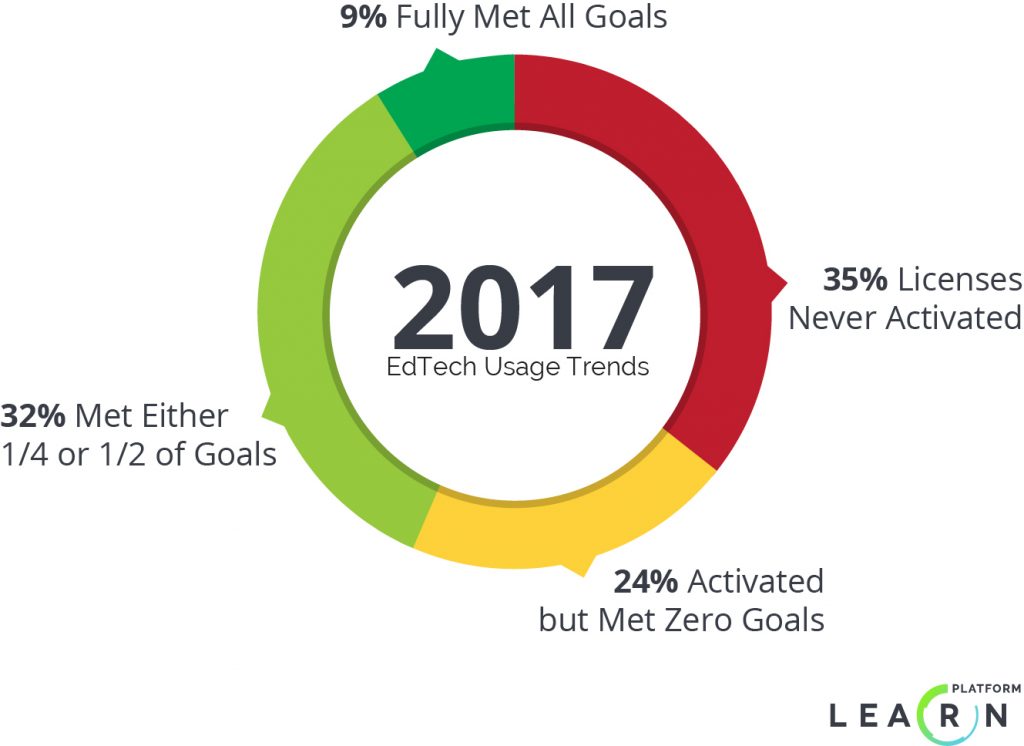 An analysis that looks at whether districts are actually using the ed-tech they pay for finds that slightly more K-12 systems are getting the value they want from companies’ offerings than they did two years ago.

The study by Lea(r)n, Inc. examined how seven well-known K-12 literacy and math products are used in 73 schools that participate in the company’s LeanPlatform, a management system that organizes, streamlines and analyzes ed-tech utilization.

Although more than a third of licenses purchased for seven well-known K-12 literacy and math products were never activated in 2017, 2 percent more licenses were turned on this year than in 2015, the last time this research was conducted by the company.

Often, schools will accept the goals recommended by companies about how many minutes or hours per week a program should be used to help children learn with their software. Many schools use that metric as a starting point for gauging success, but some establish their own goals and measure results against utilization, according to a Lea(r)n representative.

LearnPlatform measures the cost of licenses actually used in ed-tech by an indicator it calls the EdTech Price Index. This formula compares the weighted cost of a license to the cost of licenses actually used.  The ed-tech price index for 2015 was $2.86 for every dollar of license cost, and it decreased to $2.44 in 2017. The ideal EdTech Price Index would be $1.00, meaning that every $1 spent is a dollar utilized.

“The EdTech Price Index allows an organization to compare the actual cost of licenses to each other, based on price and usage,” said Karl Rectanus, who is co-founder and CEO of the company.

One indicator of an improving trend in the utilization of ed-tech is that the difference between a license that was never activated, and licenses activated but that meet zero goals, has decreased by 6 percent, said Rectanus. Similarly, 6 percent more ed-tech met at least one-fourth of the goals.

“The question two or three years ago was, ‘Do people use ed-tech?’ said Rectanus. The findings of the company’s study based on schools using the platform “represents a significant step forward,” he said.

The meta-analysis was based on 73 schools representing 36,098 students, and how they used seven well-known K-12 math and literacy products. Two years ago, the study focused on student licenses purchased for six reading and math products in 49 K-12 schools representing more than 17,000 students.

The study released by Lea(r)n is focused on depth of usage for a particular set of products, but it does not address the breadth of products being used, said Rectanus. “Our schools and districts are analyzing and seeing a whole host of products—thousands of products,” he said. For comparison purposes, this study focused on just seven of them.

Despite the lack of use of licenses in some districts, Rectanus said school officials appear to be more vigilant about getting the value they want from their ed-tech products. Referring to the unused licenses in the study, Rectanus said, “There was a politician in North Carolina that I remember used this turn of phrase: ‘We ain’t as good as we wanna be, and we ain’t as good as we gonna be, but we’re a damned sight better than we was.’ ”

Correction: This post has been updated to indicate that the goals measured in schools are for ed-tech usage. Also, the EdTech Price Index is a measure of the cost of using an ed-tech product.