Education Week recently explored the question of whether the surge of investment in education technology has ripened conditions for a “tech bubble,” akin to the broader tech bust of the 1990s.
One market analysis says it’s simply not so.

An item by CB Insights, a New York-based information services company, notes that the vast majority of the business deals in the ed-tech sector in 2012 were early-stage investments, described as “angel” or “seed” efforts. Those ventures are raising relatively little money. Many of them may fail, but that’s a sign that the market is doing what it’s supposed to, says CB Insights, which tracks the flow of venture capital, angel investment, and private equity.

Overall, $1.1 billion worth of financing from venture capitalists, angels, corporations, and private-equity investors went into ed-tech in 2012, according to the analysis. But one-third of that money was directed to just 10 companies—a “familiar and expected trend,” says CB Insights, while the remaining 70 percent went to smaller companies attempting to take off the ground.

That breakdown in investment is not, on its own, cause for worry, CB Insights says:

[T]he reality is that it’s just way too early to call a bubble. Ed tech is merely following the trend seen in any nascent, hot industry. This means there are lots of companies being founded and funded and some will be great and many more will be crap. The good news is that most of these are at the seed/angel stage which is where the deal frothiness is and which is what people point to when speculating about a bubble (“OMG, a company that helps you learn to code while you’re going to the bathroom. There must be a bubble!”). But the reality is that these companies are raising pocket change in the grand scheme of things. And if these Ed tech companies are unable to raise Series A, B, etc. funding, that is a sign of a market that is actually working. But since 70 percent of the deals are still in that early angel/seed phase, it’s too early to know if investors have lost their grip on reality and will provide funding to anyone or whether they will exercise some discipline.

On the whole, the prospects for ed-tech continue to look strong, which is one of the reasons investors are seeking it out, the analysis says.

What were the biggest ed-tech deals in 2012? CB Insights reports them as follows: 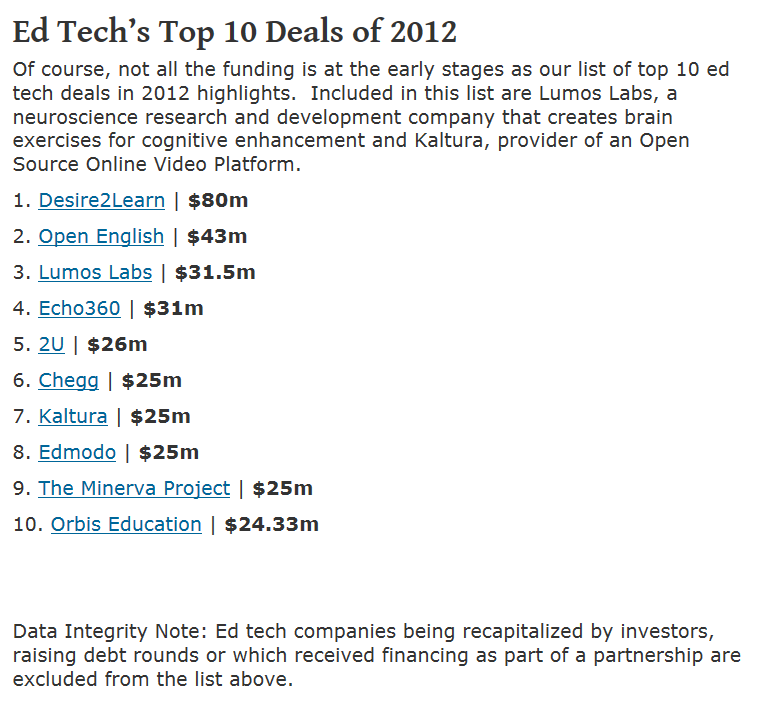