Kno, an e-textbook company in Santa Clara, Calif., that primarily targets college students, announced it is moving into the K-12 market, selling digital textbooks to parents through a new app. To do so, the company will partner with Houghton Mifflin Harcourt (HMH), the embattled but still leading textbook publisher based in New York City. Kno will develop the application and the software, creating digital textbooks with HMH content. Each book will cost $9.99 for a one-year rental.

Kno is a darling of the education technology scene, reportedly raising more than $55 million in funding from Silicon Valley luminaries. The company partners with about 60 publishers in higher education.

It’s an unusual move—K-12 textbooks, of course, are free to students, and parents have always been a tricky segment of the education market. But Osman Rashid, Kno’s chief executive officer and co-founder, believes parents will buy digital materials for their children regardless of what is being used in the classroom, especially if they already own devices, or they don’t want them lugging around books.

“We really believe in the consumerization of education that’s happening,” Rashid said in a phone interview. “A lot of parents want to take matters into their own hands.”

And regardless of how difficult the parent market can be for education companies, selling to school districts can be cumbersome as well, Rashid said.

“We didn’t want to wait for the education systems to figure out their digital strategy,” he said. “We thought, Why not provide the same textbook in an interactive experience and allow them to bring it home for only $9.99?”

Rashid said there are other price and distribution models in the works that could target other markets. 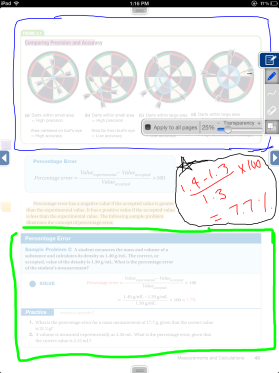 For HMH, which recently emerged from a bankruptcy-induced restructuring, the move could provide a new revenue stream without much risk. The company is still clinging to its leading position within the K-12 publishing market, but that share is slipping (down 13 percent between 2008 and 2011), as is the market as a whole (down from $8.2 billion to $7.1 billion over that span), according to estimates from Parthenon Group, a consulting group.

Kno’s textbooks—already in widespread use among college students—feature 3-D interactive models, a pen tool to mark up the book (see photo), and digital flash cards automatically created from glossary terms. The digital textbook app is already available for the iPad and online; a version for Android tablets and Windows 7 will launch soon.

There’s been grumblings from industry executives and educators that digital textbooks should not be the end goal for e-learning, especially given the cost of the devices. But Rashid said those prices will come down, and there’s significant demand for quality interactive texts.

“The content is not going to go away, it just may be sliced and diced differently,” he said.

If that slicing and dicing eventually includes a textbook version of Angry Birds, you’ll really have parents’ attention.

(Photo: screen shot of pen tool in Kno’s digital textbooks for the iPad, courtesy of Kno.)