Using open data for education could “unlock” between $900 billion and $1.2 trillion in economic value every year, according to a study that was recently released by the McKinsey Global Institute.

Of that, a substantial portion would be generated in the United States, according to the institute, which is the business and economics research arm of McKinsey and Company, a global management consulting company with offices in 20 U.S. cities.

In a world with more than 1 billion students, where more than $4 trillion is spent on K-12 and postsecondary education, ample opportunities exist to increase the efficiency and effectiveness of current systems, according to the study’s authors. “By standardizing and sharing data that already exist, the effectiveness of education around the world could be greatly improved,” they write.

Open data is defined as the release of information by governments and private institutions to enable insights across industries. The authors measure economic value in education primarily in terms of the payoff provided by increasing students’ skills, level of education and life-long earning potential, and the money that schools can save on purchasing and other functions. 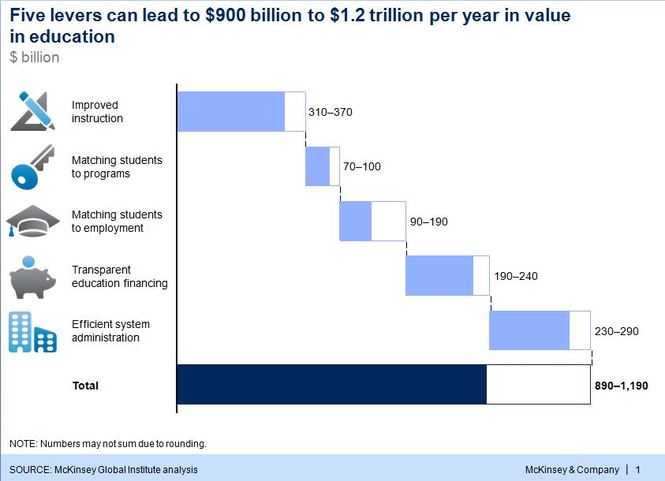 “An increasing amount of data is being made more ‘liquid’,” Michael Chui, a principal at McKinsey Global Institute in San Francisco and a co-author of the study, said in an interview. That means the data is flowing openly, is widely available and in shareable formats to be read and analyzed by technology. “Not only can this data be used to create transparency or accountability, but also to create economic value,” he explained.

“In each of these ways [that open data can create value,] we’re starting to see organizations use it,” said Chui.

More efficient system administration could save districts and institutions $230 billion to $290 billion per year—or 8 percent to 10 percent of public education spending—mostly through “enhanced procurement,” the authors write.

Chui said the institute’s research showed that different districts often end up paying different prices for the same goods. If procurement procedures were made more transparent, districts would know what their peer school systems are paying for supplies and learning materials, giving them a better position for negotiation, he said.

For businesses interested in education, open data offers “lots and lots of opportunities for improving educational outcomes, as well as making a profit,” Chui said. Increased productivity, new and improved products and services, and novel lines of business are among the potential openings for enterprising individuals and companies, the report states.

But potential business risks exist as well, namely issues when companies’ reputations are affected by the release of negative information, or the inadvertent release of confidential information like benchmarking data. In recent months, privacy of student data has gained visibility when Common Sense Media, an organization known for rating educational technology products for their usefulness and appropriateness, called on major industry groups to step up efforts to protect children’s privacy and student data from being used for commercial purposes.

“Without support from the key stakeholders—students, parents, teachers, administrators, and policymakers—open-data efforts will not go far,” the authors write.

Chui added that there is a need for “robust, thoughtful dialogue about privacy, confidentiality, and security in how to use data.” Decisions will need to be made, he said, about “who should have access to information, and for what purposes.”