The surge of capital flowing into the sector has been driven in large measure by companies based in China and India, businesses that had gained traction pre-COVID but which have seen their upward momentum rise since then, according to a new report from CB Insights.

The activity has been driven by 13 mega-deals of at least $100 million. Mega-rounds of fundraising have come in for Yuanfudao (a $1 billion Series G round) and Zuoyebang (a $750M Series E round), both of them based in China.

India-based BYJU’s, which has drawn a torrent of investment over the past few years, and China-based VIPKid also rank near the top of the fundraising hierarchy so far this year, CB Insights found. 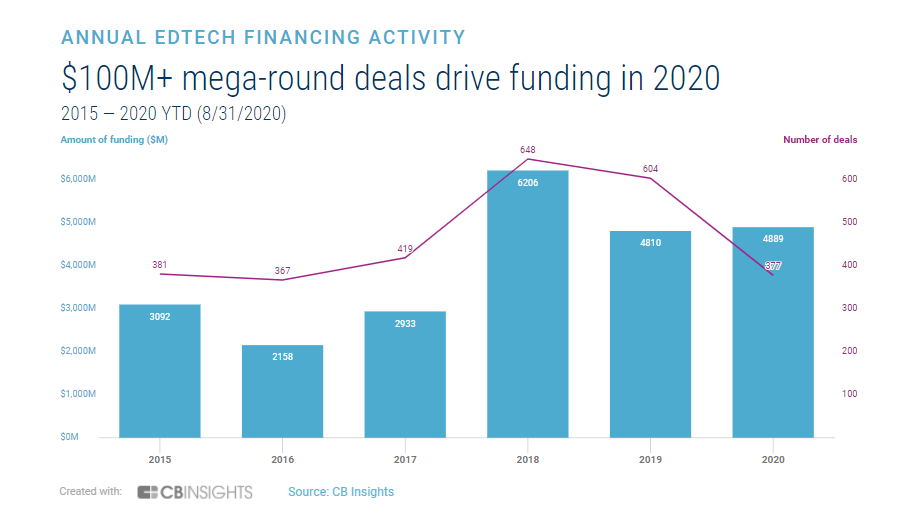 CB Insights intelligence analyst Kenya Watson said in an e-mail that there has been increased investment activity across the K-12, higher education, and workforce-focused sectors, “though it appears that there is heightened investor appetite for startups focused on K-12 education.”

She pointed to Yuanfudao, a provider of live courses and tutoring; and Zuoyebang, which provides an online learning app; as well as BYJU’s, a mobile learning app company.

“Investors are doubling down on their ed-tech bets with later-stage startups,” Watson said. They’re “betting that these startups will be able to retain much of the growth they are experiencing, and that tech-enabled learning will be here to stay even after the pandemic subsides.”