That represents a 5 percent increase over the $7.97 billion reported in 2011-12, according to John Richards, founder and president of Consulting Services for Education, Inc., the Newton, Mass.-based firm that conducted the study on behalf of the SIIA. The largest gains were seen among those producing online courses, which tripled in sales, contributing about $700 million to the total, he said.

For this report, 144 companies responded with their data. Richards extrapolated from their reported revenues to come up with total market figures. Two-thirds of the companies that provided data last year and this year reported increases in revenues, he said. 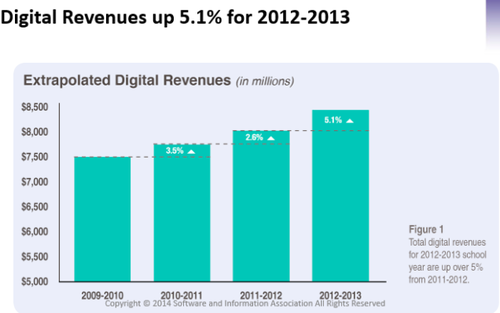 These results, released in advance of the full SIIA education market survey, were among many data points discussed when about 350 entrepreneurs, executives, venture capitalists, and consultants gathered here for the past two days to network and learn from one another.

Besides attending panels and interviews with featured speakers, the SIIA asked participants to vote for the most promising products from a field of 10 finalists in the annual “innovation incubator” program, which is designed to identify and support entrepreneurs in their development and distribution of innovative learning technologies.

Two companies tied as winners of “Most Likely to Succeed”—Cogent Education, and Listen Current. Cogent also won for “Most Innovative” and a “Faculty Choice” award.

Cogent Education makes interactive cases to allow students to act like scientists and solve real-world problems. Teachers can see in real-time how their students are progressing, identify pain points, and intervene immediately.

Educators voted Crack the Books, from the Mobile Education Store, to receive the “Educators’ Choice Award.” Crack the Books is a digital interactive book series designed to foster reading comprehension and student engagement through adjustable reading levels and hundreds of interactive elements.

Chart provided by the SIIA.

Correction: The original post contained an incorrect statistic for the number of K-12 students worldwide. The correct number is 1.5 billion.