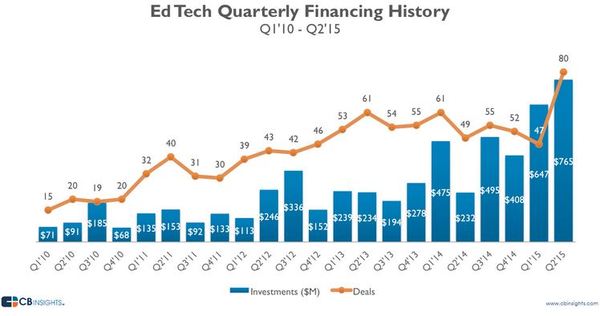 A 96 percent boom in venture financing to all education technology startups in the past year paints a rosy picture over a more nuanced K-12 ed-tech landscape.

The second quarter of 2015 “set a new high-water market for ed-tech deals and financing,” with $765 million in funding across 80 deals, according to a recent blog post by CB Insights, a market research and analysis firm.

But companies selling their technology primarily to K-12 in the U.S. are not the main contributors to these record-setting numbers.

The biggest and most highly valued companies in ed-tech are in “open” platforms, said Matthew Wong, a research analyst who covers education for the New York-based CB Insights. That means the companies might offer one subject—like language learning—for students of any age, or they focus on providing specialized training via web-based tutorials for adults.

Although CB Insights does not break out businesses that are focused on K-12 in its public analysis, they are represented in its reporting, said Wong. Companies with a larger presence in K-12 that are receiving their second and third rounds of financing “have figured out a model where they don’t have to get encumbered by tough sales cycles, especially selling into school districts,” he said.

Wong cited Remind—which makes a mobile messaging app to connect parents, students, and teachers—as a business that grew organically, then raised $40 million last year. “While a company like that has risen up, there’s still the question around what will keep these platforms sustainable? I think that’s an issue that a lot of investors face,” he said.

Among companies that raised money, CB Insights identified the “top 10” best-funded companies, from 2010 to the second quarter of 2015. Those with some level of K-12 presence on the list are:

#3 – Altschool, which received $100 million from Mark Zuckerberg and others for its community of private “microschools”

#7 – Udemy, which includes courses for K-12 teachers among its offerings

#9 – Knewton, a company that offers an adaptive learning platform

11 thoughts on “Ed-Tech Venture Capital Boom, and the K-12 Part of the Pie: It’s Complicated”