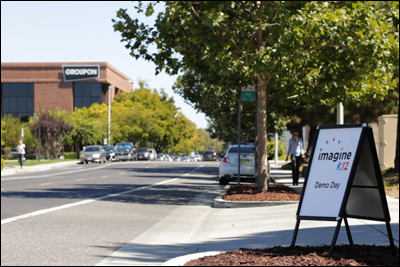 On Tuesday, I wrote about how education entrepreneurship isn’t necessarily concentrated in the typical hubs of technology like Silicon Valley and New York City. Some young companies head to the valley to court investors, be part of the startup culture, or participate in incubator programs like Imagine K12, the Palo Alto, Calif.-based firm that invests in and advises education-technology companies, and the subject of a recent article I wrote.

But in education, where much of the decisionmaking is made locally, teachers and students have different experiences from state-to-state and even town-to-town, and local regulations create hundreds of distinct, fragmented markets, some argue that entrepreneurs must understand what’s happening in their backyard before they can head to the valley.

One company, Kickboard, a school-management software company that is based in New Orleans, followed that path. After postponing plans to work in Silicon Valley’s technology scene, Kickboard’s founder, Jennifer Medbery, taught in a New Orleans charter school, following a stint with Teach for America. When she got her idea to create software that helps teachers and schools manage classrooms, she spent the summer working on a prototype and, the next school year, testing the product in three schools where she had connections.

“I wanted to test the hypothesis first,” she said in a recent interview. When she felt the product reached the point where it could help other teachers, she started a company. Its since grown to use in 150 schools in 15 states, she said, but the company remained in New Orleans because she has gained so much access to schools. Just recently, she took her entire team to an elementary school nearby to observe how teachers there use Kickboard.

“The fact that we are out of the valley has never introduced any barriers,” Medbery said. “If anything it helped us.”

Kickboard predates, 4.0 Schools, a nonprofit organization that helps education entrepreneurs in that city, but she’s worked with Matt Candler, 4.0 Schools founder, who says her company’s path helped inspire the organization. Medbery raised a series of small investments from “angel investors.” Because technology has allowed entrepreneurs to start companies very cheaply, that was enough to get Kickboard off the ground.

That’s why Candler believes his approach in New Orleans, 2,200 miles from Palo Alto, doesn’t put entrepreneurs at a disadvantage.
“Investors are asking us to, ‘Do all the work and when you’re ready I’ll fly down there and see it,'” Candler said.

This is not to say that Imagine K12 views things so differently. Like 4.0 Schools and Startup Weekend EDU, a national organization that supports local communities of education entrepreneurship, Imagine K12 believes in a user-centric approach, one that closely involves teachers in product development and problem solving. As you can read about in my piece, one of the major events of Imagine K12 is “educator day,” when each of the companies pitch their product to a room of teachers and get feedback on how to make it better.

It’s just that in order to get those ideas off the ground in the first place, computer programmers and software developers must be involved, and the most talented ones tend to end up in the valley, Brady, one of the Imagine K12 partners, said. Check out this great interactive map from American Public Media showing technology jobs state-by-state. There are 931,000 technology jobs in California, with an average salary of $110,000 per year (twice the average non-tech salary), tops in the nation in both cases. Louisiana ranks 32nd in tech jobs, with 40,900, and 40th in average salary for those jobs, at $61,800 per year, which is only 50 percent more than the average non-tech salary.

Brady told me that when many of the companies selected for Imagine K12 arrive from other places, they initially intend to move back after the program. Most end up staying, he said.

I put together this map that shows the office addresses for the investors in ClassDojo, an online behavior management tool that participated in Imagine K12 last year and recently completed a $1.6 million round of funding. Two share the same building with Imagine K12’s offices, which also doubles as ClassDojo’s listed address on its website.

Compare that to this map of Kickboard’s angel investors.

There aren’t necessarily right or wrong answers in this debate and everyone agrees the more promising companies that can get off the ground the better. Both Candler and Khalid Smith, the leader of Startup Weekend EDU, said they appreciate what Imagine K12 and like-minded investors are doing for the entire education startup ecosystem. In technology parlance, there are “upstream” and “downstream” investments need to support companies. The former, which represent what 4.0 Schools does, occur much earlier in the entrepreneurial process and are more risky, Candler said. The latter are more typical to Imagine K12, and occur past the “idea” stage, Candler said. For instance, EdCanvas, a multimedia lesson tool founded by three former Microsoft employees, got its start at a Startup Weekend event in Seattle and is currently participating in Imagine K12.

That ecosystem will become larger and more varied. Socratic Labs will take a similar seed-money-for-equity approach to Imagine K12. Plans are to select 10 companies for the first six-month cohort, which will begin in New York City in January, said Heather Gilchrist, a partner at Socratic Labs and a co-founder of Grockit.

Startl, an incubator program that preceded and inspired Imagine K12, is currently on hiatus and considering tweaks to its format.
One of the co-founders, Laurie Racine (the others, Phoenix Wang and Diana Rhoten have recently left Startl) is mum on specific details, but future iterations of Startl could support local communities of entrepreneurship, she said.

One of Startl’s previous incubator terms was held in Philadelphia, in partnership with DreamIt Ventures, a Philadelphia-based incubator that also holds programs in New York City, Israel, and Austin, Texas.

“Education entrepreneurship is not centered on either coast, it’s much more distributed across the country,” Racine said in an interview. “There is no center of gravity for education technology.” She added: “We need to go where the activity is as much as we need to go to New York and the valley.”

So, all that being said, I’d like to know:
Where are the best local communities of education entrepreneurship that you know of?

Let me know in the comments, or via email.

This post has been corrected to reflect that Kickboard’s founder taught in New Orleans after participating in Teach for America.