Education organizations worldwide expect to take a big financial hit — especially in the short term — as the coronavirus creates havoc with schools and society, a new survey reveals.

The results paint a grim picture — though there are hints that technology-based firms see themselves as being relatively insulated from the economic blast caused by the global health crisis.

The survey was conducted by HolonIQ of executives from not just education companies in K-12, pre-K, higher education, and adult learning, but also leaders of colleges, as well as investors and government officials.

As school districts have shut down and increased online learning during COVID-19, education companies rethinking their expectations of their workforces, and how they’re deploying them. They’re increasing their employees’ use of remote-learning tools, adjusting HR policies to make taking time off easier, and asking staff to take on new, different duties as needed. You can read the story in EdWeek Market Brief.

The 700 respondents represent perspectives from 50 countries, with a heavy weighting from Europe, Latin America, and North America. HolonIQ is a global research and intelligence firm based in Australia.

In North America, 48.5 percent of those surveyed say they expect their education organizations to be moderately worse off in the short term, and nearly 18 percent predict they will be substantially worse off. 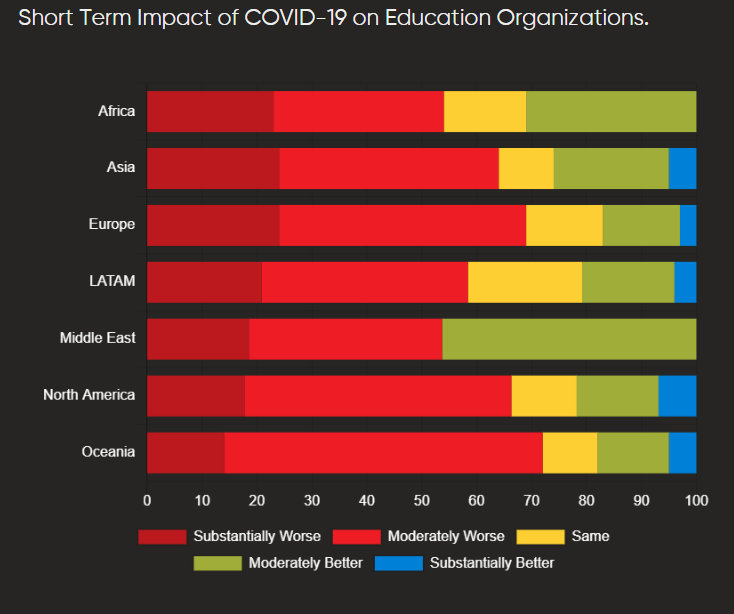 The organizations responding from Asia were similarly pessimistic, with 64 percent saying they expect to be substantially or moderately in tougher shape because of COVID-19. In Europe, the number was 69 percent.

When asked about the long-term outlook, education organizations were more optimistic.

Thirty percent of those surveyed from North America predict their organizations will be moderately or substantially better off, while the numbers were comparable in Asia (36 percent) and Europe (32 percent). In Africa, it was 38 percent.

Ed-Tech Leaders Not as Shaken

When the results were broken out by types of organizations, 91 percent of executives from educational institutions believe they will be in worse conditions in the short term, and 82 percent of investors foresee the same.

But ed-tech organizations were markedly more hopeful about the future in the coronavirus era. 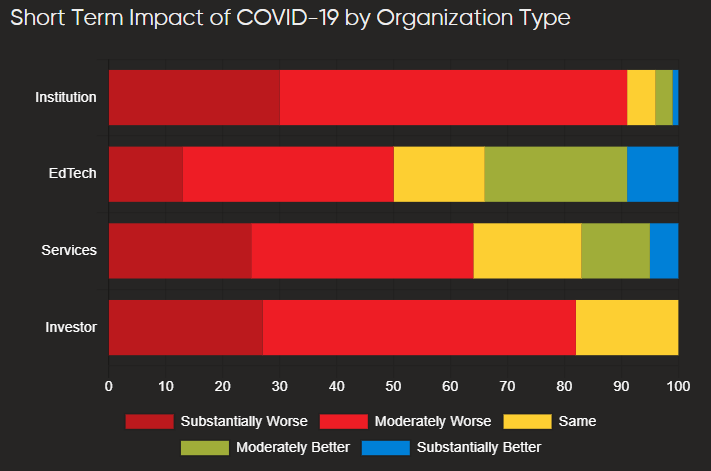 The outlook seems much more grim for other education organizations. Just 13 percent of executives from educational institutions expect to be better off in the long term, and 18 percent of investors feel the same.

Patrick Brothers, HolonIQ’s co-CEO and co-founder, said the relative optimism in the ed-tech community probably reflects the extent to which the coronavirus has fed a surge of interest in online learning.

Many school districts in the United States, for instance, are scrambling to explore virtual education options to meet the needs of homebound students, families, and teachers.

Up until this point, “the supply of digital learning solutions has far outweighed the demand and appetite of schools, colleges, and universities,” Brothers told EdWeek Market Brief in an email. But the crisis “has suddenly inverted that situation.”

Ed-tech providers, he said, “seem optimistic that this period will create mass awareness and experimentation that might have taken 5-10 years to achieve at the normal pace of the education industry.”

As a new hunger for online learning options takes hold, Brothers warned that tech products could get rushed into the market, only to feel the sting of a backlash.

Those products that don’t help parents and schools will be “judged harshly by the consumer,” he added. “What many see as a ‘golden era for ed tech’ may turn out to accelerate judgment that it is truly inferior to and not a substitute for place-based learning.”

One thought on “Education Organizations Expect to Take Economic Hit From COVID-19. But Ed Tech May Catch a Break”