Procurement in education and local government showed strong growth in the second quarter of 2017, with purchasing of educational services increasing the most of any category, according to a report by Onvia.

Contracting at state, local government, and school district levels surged in the first two quarters of 2017 at a 5.4 percent annual rate of change in the second quarter and 4.9 percent in the first. Education is at peak levels compared to the last two years, said Paul Irby, the company’s lead market analyst and author of Onvia’s State & Local Procurement Snapshot Q2 2017, which analyzed published RFPs and bids to produce its findings.

Of a dozen industries studied, educational services grew fastest for the second quarter of 2017, increasing 6.1 percent compared to the first quarter, Onvia’s research showed. The next fastest-growing sector was architecture and engineering (4.2 percent) followed by technology and telecom (3.9 percent), according to the analysis by Onvia, a company that provides enterprise, mid-market, and small business customers with a comprehensive set of federal, state, local, and education government contracting leads. At the other end of the spectrum, healthcare procurement declined 4.7 percent from the first quarter.

“States have been speeding up on their buying for state-wide educational consulting and curriculum,” Irby said. Educational consultants who have been hired to help states interpret the Every Student Succeeds Act could be one dynamic driving the growth in educational services, he said. All states need to submit their ESSA plans to the U.S. education department this year.

For its research, Onvia examined bid/RFP volume by level of government. The chart below shows a comparison of the current quarter compared with the same quarter in the previous year. 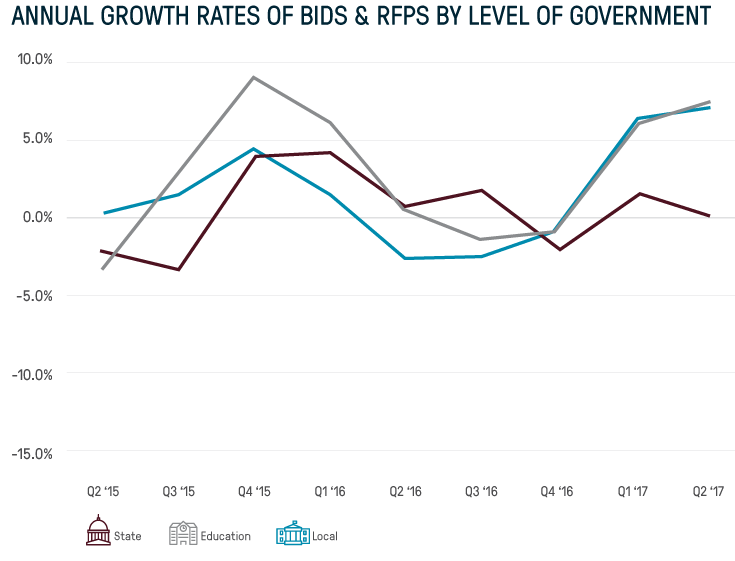 Key to the fast growth was a procurement deceleration last year. “Bids and RFPs for 2016 were slower than normal,” said Irby, a fact that Onvia attributes to uncertainties in government contracting during an election year. “We were seeing less than expected growth then. Now we’re seeing more than expected growth, which we think of as additional purchases to catch up with what agencies didn’t buy last year.”

Onvia, which contributes to EdWeek Market Brief’s Purchasing Alerts that highlight notable RFPs and contracts awarded every week, expects the trend to normalize in the future. Third quarter statistics should show whether the market returns to an average of 1 to 2 percent growth sooner, rather than later, Irby said.

Earlier this year, Onvia identified “innovating education” as the second highest hotspot for government contracting in 2017, and “growing school bus services” as the 10th likeliest place for educational purchasing.

That report, released in February, found that education bids and services grew from 2,623 in 2015 to 3,160 in one year, the company found. The company pointed to three factors in the growth, and its projection for future growth: continued demand for more or better use of ed-tech, the focus on science, technology, engineering and math or STEM, and evolving standards for curriculum and performance measurement.

Bus service bids and RFPs issued by public districts are continuing to grow on a nationwide basis, increasing by 10 percent from 2015 to 2016, the report said, with high concentrations of these projects in New Jersey and New York.

Cooperative purchasing alliances are another factor in school and district purchasing.

“In our research, 70 percent of all agencies are buying from co-ops,” said Lyndon Dacuan, Onvia’s content and communications manager, and 14 percent of all spending is going to them.