Industry executives and investors in virtual, augmented, and mixed reality businesses believe there will be strong demand for those technologies in the education market in the years ahead, according to a newly released survey.

Education came in tied for second, behind only gaming, with 41 percent of respondents selecting the sector as “most applicable” for the technologies at this time, in a survey by Perkins Coie, a Seattle-based international law firm, and the XR Association.

That’s a significant jump from 26 percent when the same survey was done last year. Gaming was #1 at 61 percent in 2019, a position it has commanded in every one of the surveys over the past four years.

XR is an umbrella term that covers augmented reality, where digital images or text are projected against a viewer’s real surroundings; virtual reality, in which a digital environment is created so users can interact with it using a viewer in ways that feel real; and mixed reality is a combination of the two.

Education came in third as the area where this group thought the most investment is likely to be directed to develop AR, VR, or similar technology or content over the next year, with 36 percent predicting that funding will flow into the sector. (See the full list, below.)

The survey did not differentiate to what extent investor and technology respondents were thinking of “education” as K-12 or higher education applications for XR products.

VR and AR were used in about one-fifth of the 100 educational game designs featured at the U.S. Department of Education’s annual ED Games Expo earlier this year, but it’s still unclear whether educators will gravitate towards using those games in schools. 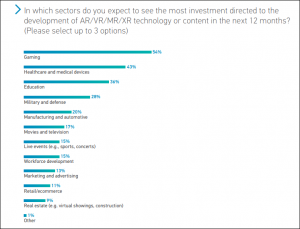 The survey was taken of 200 startup founders, executives with established technology companies, investors and consultants. It is the third conducted by Perkins Coie in the past four years.

“By the year 2025, immersive technologies of XR…will be as ubiquitous as mobile devices,” predicted the authors of the “2019 Augmented and Virtual Reality Survey Report,” which also identified obstacles to adoption.

Perkins Coie also asked respondents about barriers that get in the way of adopting XR. User experience shortcomings—such as bulky hardware or technical glitches—were identified by 26 percent of respondents as getting in the way of widespread adoption of AR technologies. And 24 percent said issues with content offerings—such as lack of quality content or an inadequate amount of content—also interfered with mass adoption of AR.

For VR, 27 percent of respondents took issue with user experience and 19 percent with content offerings, citing these as reasons it has not been more widely adopted.

Seventy percent of respondents anticipate that the AR market will surpass the VR market in revenue. About 81 percent predicted that will happen within the next five years.

Consumer privacy and data security were selected as the leading legal risks to the development of immersive technology by 61 percent of survey respondents, a significant uptick from last year’s survey when only 44 percent had that concern.

To the extent that K-12 is part of the projections, companies will need to address those issues as well. A survey two years ago found that AR and VR had yet to gain traction in K-12. But schools are beginning to dip their toes into the XR waters, according to research by EdWeek Market Brief. Recent RFPs reviewed by EdWeek Market Brief has highlighted some districts’ appetite for these devices.

For example, last year the 21,000-student Rockwood R-VI School District in Missouri asked for bids to provide computing devices offering a “3D, augmented reality, virtual reality, and a haptic-enabled (or touch-sensitive) experience for the students.” Meanwhile, the 75,000-student Davis, Utah, district was in the market for VR hardware and software last year, too.

More than 15 percent of U.S. schools will have virtual-reality classroom kits by 2021, predicts Futuresource Consulting, a U.K.-based market-research firm. Other experts, however, say any potential growth will depend on how the field navigates as-yet unanswered questions about virtual reality’s classroom value and long-term impact on children.

Interested parties in this conversation include tech giants like Google and Facebook with its Oculus. Both companies are members of the XR Association with other businesses heavily vested in creating the hardware and/or software that will be used for the various “reality” experiences.

Teachers, who have sometimes found “syncing” VR field trips on all devices to be a difficult task, will soon be able to control their classes’ field trip from a tablet so that everyone is at the same spot, said Joshua Young, founder of Design Reality and Reflective Brands, who was quoted in the report.

“We’re getting more and more tools” that increase the usefulness of XR in schools, said Young. He pointed to the example of Google Expeditions providing VR field trip experiences.