The worldwide education company Pearson is vowing to report more specific information on the impact of its work on students’ academic results and other measurable targets, it announced this week.

The publicly traded company, which has headquarters in London and recently reported revenues of $4.3 billion, said it will report “audited learning outcomes” along with its financial information, for its entire business beginning in 2018.

“The company’s ambition is to ensure that its work is driven by an ever-clearer understanding of how it can maximize and measure its impact,” Pearson said in a statement.

Pearson officials likened their strategy to lessons that have been drawn from the health-care sector by using research and development to create new partnerships. By applying that type of analysis to school issues, the goal is to address “the most pressing unmet needs in education.” 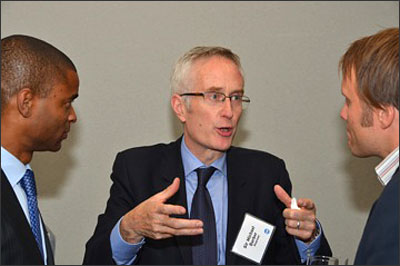 To coincide with its announcement, the company released a pair of reports. One of them is “Asking More: The Path to Efficacy,” meant to describe what the company sees as the importance of measuring and raising learning results across countries. (Pearson says it works in 70 countries, and has 45,000 employees.)

The second document is “The Incomplete Guide to Delivering Learning Outcomes,” which provides details on how the company believes it can accomplish the goals it has laid out.

Barber, who the Guardian once referred to as the Labor party’s “mad professor and master of the flow chart,” has drawn considerable praise, and some criticism, for his work in Britain and his overall views of education policy, which have been widely circulated among policymakers in many countries, including the United States. He is known for advocating for strong standards across many areas of education, including within the teaching profession.

“Global education challenges are too steep for any one organization to pursue independently,” Barber said in a statement about Pearson’s new plans. “We are sharing the progress we are making so that others can challenge and support us to move more rapidly.”

[UPDATED (Nov. 18):  In an interview, Barber said that the “outcomes” Pearson reports to the public and investors will vary, depending on whether the product or service is focused on curriculum, online learning, language acquistion, assessment, or the many other areas where the company works.

Those measures could include test scores, graduation rates, or, when appropriate, research on how students served by Pearson fare once they reach the workforce, he said. He said that it’s too early to know the exact methodology the company would use to collect and report that data, and how scientifically rigorous it would be.

“There’s no one, simple answer,” he said. What is known is that “we need to be collecting really good student-level data.”

Barber acknowledged that the company’s efforts will draw a skeptical response from those who regard its proposal as little more than a “public relations exercise.” But he predicted that Pearson will take numerous steps in the next few years to prove at least some of the doubters wrong, by coming up with reliable standards for judging its work. He reiterated that the results will be reviewed by an auditor, who will judge the academic standards as thoroughly as other auditors review the organization’s finances.

“That is a very big commitment for a company to make” Barber said, later describing it as a “radical development.”

Pearson will create standards based partly on input from educators, researchers, and others, to supplement ideas put forward in the “Incomplete Guide,” Barber said. He cast Pearson’s move as part of an overall shift in education from judging schools based on “inputs” to results. “We want to be helping lead it,” he said of that movement. He also said that between now and 2018, Pearson will show its commitment to basing decisions on academic results in other ways, such as through the decisions it makes about acquiring smaller businesses.

“Does [a company] already demonstrate efficacy, and if not, could we put it on path to efficacy?” Barber said.

Five years from now, when Pearson is reporting learning outcomes across its operations, it’s possible that shareholders and others could react negatively to lackluster academic results, much as they might to a poor financial showing today, he said. But he said that prior to the company unveiling its proposal, Pearson officials had circulated it within the education community, and received a positive response. “If we demonstrate our input on learning outcomes,” he said, the market will reward our “strong track record in helping students.”

“Might there be, on the way to that, some rocky moments?” Barber asked. “Who knows?” ]