Mergers and acquisitions within the education industry rose by 5 percent in the first half of 2013 over the second half of last year, an uptick driven by deals focused on testing and assessment products, cloud-based systems, e-reading, and other areas, according to a newly released analysis.

The overall number of education-focused transactions rose from 128 in late 2012 to 135 in the first half of 2013, reports Berkery Noyes, a New York-based investment bank, which also conducts market research.

The combined value of those deals, meanwhile, fell by 16 percent, from about $4.6 billion in the second half of last year to $3.8 billion the first half of 2013—though they’re still up over a year ago, when there were $2.7 billion in deals.

Peter Yoon, the managing director of Berkery Noyes, said in a statement that the education industry remains in a “period of transition” which began during the deep recession a few years ago—and drained state and local K-12 budgets—and has continued to feed an “environment where many are questioning the value of the traditional education models.”

The players involved in major education deals during the first half of 2013 included worldwide publishing giant Pearson, which was involved in three transactions, Berkery Noyes reported. One of those deals, the acquisition of Learning Catalytics, focused on cloud-based learning, while the acquisition of Exam Design centered on test-development software.

But the list of buyers in the education space also included companies such as Xerox, which bought an e-learning copany, and Renaissance Learning, which acquired Subtext, an e-reading platform designed to align with the common-core standards. (Companies across the education field today are eagerly attempting to align products with the common core, and brand them as such. The common-core standards have been adopted by vast majority of states around the country.)

Here’s Berkery Noyes’ breakdown of education-related mergers and acquisitions, and their dollar value, since 2011: 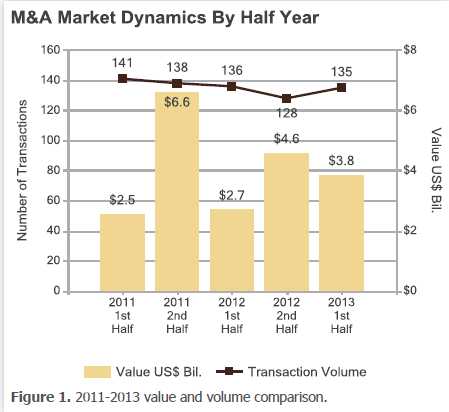