Educators rescued a K-12 technology company this week by helping it raise $30,000 through the crowdfunding site Kickstarter, which will keep the organization’s doors open—at least for now.

Teachers and IT specialists at schools rallied on behalf of edshelf, a free, online directory of socially curated educational technology that was on its last financial legs, said Mike Lee, co-founder and CEO of the San Mateo, Calif.-based company.

Lee and a business partner launched the company in 2012. Although 15,000 IT specialists and teachers from 6,000 school districts eventually registered on edshelf, Lee said he couldn’t convince investors to give his company the $1 million in venture capital that he sought from them.

After two years of failing to raise money, Lee’s business partner left, and Lee resorted to taking early IRA distributions and family loans to keep edshelf afloat. Still, that did not cover expenses.

Early in July, Lee announced that he would be shuttering his website.

Much to Lee’s surprise, the announcement of edshelf’s impending demise generated support from educators, librarians and school technologists. Some started a Twitter campaign called #SaveEdShelf, and shared it widely.

Lee took that as an inspiration to create an appeal via Kickstarter, a website that allows people to seek “crowdfunding” for projects from anyone who reads about them, and supports their plans. Of the 290 backers who helped Lee meet—then exceed—his $30,000 goal, 89 percent of donors identified themselves as educators, he said. Another 8 percent were Lee’s friends outside the education realm, and the remaining 3 percent were colleagues in ed-tech, or failed to identify themselves by category. 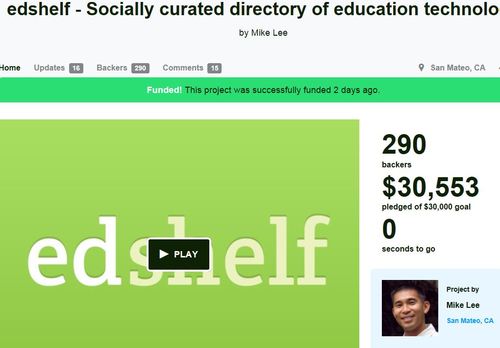 Few companies could sustain themselves with an infusion of only $30,000. But Lee said he is bringing in revenue by accepting advertising for the newsletter updates he sends out, which is one way he will keep the site afloat.

Oddly, Lee also reports that he has recently received inquiries from investors, but he has rebuffed them for now, calculating that the business model with advertising and other changes should provide enough funding to keep edshelf going. (Lee had hoped to eschew advertising in his original business model.)

The $30,000 will be used to cover edshelf’s monthly operating costs, Lee said, and to contract with a designer and a developer to help him build additional revenue-generating features. “With the attention I’ve received from the Kickstarter campaign, I’ve worked out some deals that will lower my monthly costs,” he said. “These additional features will be enough to cover those costs in a relatively short amount of time.”

Lee started edshelf by talking to teachers about what they needed. “We gathered a list of all the problems teachers were facing, and realized there were already [ed-tech] solutions for them,” he said. But the teachers had one suggestion: “Why don’t you create a directory of ed tech for teachers?” The site is socially curated, meaning members can make recommendations, collect resources, and write their own reviews. An algorithm is used to determine what’s trending.

When Alicia Leonard, who is now a 2nd grade student teacher at Hutchison Elementary in Herndon, Va., discovered edshelf last May, she was delighted, she said in a phone interview. It helped her find vetted resources in a technology course she was taking in pursuit of a master’s degree in education.

“There’s so much [ed tech] out there. To have it reviewed by other teachers who aren’t paid to do the reviews is really fantastic,” she said. News that her trusted resource was about to close prompted her to tweet and blog about it.

Edshelf is by no means the only resource for educators interested in sorting through the mountain of ed tech to find out what’s most effective. Last year, Common Sense Media launched Graphite, a free service that pays independent reviewers to rate apps, games, and websites for the classroom. PowerMyLearning is another platform that identifies games, videos, and interactive tools for teachers, students, and parents. ShareMyLesson, which is a partnership between the American Federation of Teachers and TESConnect, offers similar resources.

“To get edshelf to be ‘Ramen profitable,'” or making enough money to cover basic living expenses, he said, “will take a bit more time and effort.”