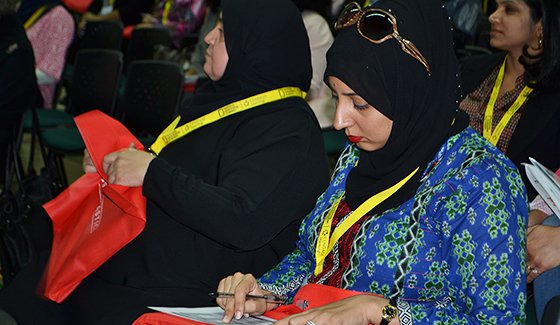 The United Arab Emirates might seem an unlikely place to find a conference on the U.S. Common Core State Standards. But Dubai is center stage Friday and Saturday for about 200 educators from the Middle East and North Africa who are meeting to delve into the common core.

Despite the fact that seven states in the United States are not on board with the common core, the standards have been embraced by 110 American curriculum private schools in the UAE—including 30 in Dubai alone, according to Alison Burrows, co-founder of KDSL, a UAE-based education company that organizes the conference.

“There are hundreds of thousands of K-12 students here who don’t qualify for public school,” she said, because the government only provides a free education for its citizens. “We have a huge international private school market offering various curriculums—American being one of the most favored.”

Each emirate has its own regulatory agency for private schools. In Dubai, it’s the Knowledge and Human Development Authority, and this organization requires American curriculum schools to practice the common core. This organization partners with the New England Association of Schools and Colleges, which inspects the American-oriented schools annually, according to Burrows. That review is central to the adoption of common core, as is the fact that, “if schools here want to be competitive with schools back home,” they need to follow the standards, she said. 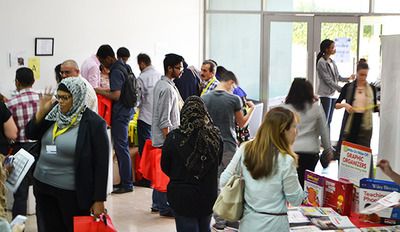 curriculum schools, and attendees can choose from 25 interactive sessions exploring the English language arts, math, and Next Generation Science Standards, said Burrows, a native New Yorker who moved to Dubai seven years ago to teach after losing her Edgemont, N.Y., elementary school teaching job as part of a “last in/first out” staff reduction during the recession.

The Northwest Evaluation Association, which produces the Measures of Academic Progress assessments, will be exhibiting, as will Scholastic, Teacher Created Materials, and Interactive Data Partners—all U.S.-based companies. Oxford University Press, which is the conference’s main sponsor this year, is rolling out a resource to be used in common-core teaching, too, Burrows said.

“MAP testing is big in the UAE, and across the region, because when a school is inspected, they have to submit data to regulatory agencies about where the students are, where they were, and where they are expected to be” academically, Burrows explained.

The keynote presenter at the conference is Norman Webb, who created the “depth of knowledge” classification system to explore the extent to which the common-core assessments gauge students’ deeper learning. Among the exhibitors will be WebbAlign, a new partnership program based on his research, to help K-12 educational publishers validate the rigor of their curricula and assessments.

The common core standards—which have been much discussed, debated, and challenged in the United States—are being studied, taught, and implemented with interest in the Middle East, said Burrows, who also conducts professional development on the subject throughout the year with her educational consulting partner, Kevin Simpson. He is a Flint, Mich., native who has taught, consulted and/or collaborated in parochial, public, charter, and international schools in the United States and abroad.

Photo credit: Images from the 2014 conference, taken by Stephanie Mukherjee.