Schneider is the president of digital operations and chief technology officer for RR Donnelly, a publicly traded printing and communications company. RR Donnelly earned $10 billion in sales last year but was recently downgraded from stable to “negative” by Standard & Poor’s. It also received some bad press last month after the company was blamed for releasing Google’s earnings reports by accident.

Follett, based in River Grove, Ill., is a private company, so financials aren’t available, but the company said it generates $2.7 billion in revenue. It is perhaps best known as a wholesaler for educational materials used in K-12 schools and libraries, and operating college bookstores. A subsidiary, Follett Software Company, develops resource and library management technology for schools. 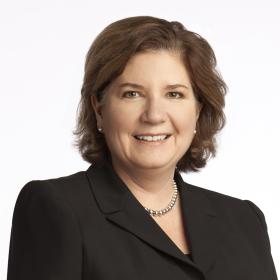 Schneider, who has served on the company’s board of directors, is the first CEO in the company’s nearly 140-year history from outside the Follett family. She succeeds former CEO Chuck Follett, who retired in June. Perhaps tellingly, she is credited with developing Donnelly’s digital photography management software.

“The Board of Directors unanimously approved Mary Lee’s appointment because of her past success leading technology businesses and operations at large public companies,” said Alison O’Hara, Follett Corporation’s board chair and the acting CEO until Schneider begins Nov. 26, in a statement. “She has been one of the drivers of RR Donnelley’s transformation from print to digital, which is a critical focus for Follett and our customers throughout education.”

In September, Follett announced a partnership with Curriki to distribute the company’s library of free, open educational resources, boosting the company’s growing database of OER materials and, like other publishers, positioning itself to be a distributor of free content, in addition to a seller of proprietary content.

Since September 2011, most of the major educational publishers have shaken up their leadership. Last year, Linda Zecher, a former Microsoft executive, took over as CEO of Houghton Mifflin Harcourt. In June, McGraw-Hill Education named Lloyd Waterhouse, a former IBM executive, its new CEO. And in October, Pearson announced that longtime CEO Marjorie Scardino would step down at the end of the year to make way for incoming CEO John Fallon, the head of the publishing giant’s international education division.