Former Chicago Schools CEO Barbara Byrd-Bennett pleaded guilty to a single count of wire fraud in Chicago on Tuesday, stemming from a federal investigation that led to charges that she steered more than $23 million in contracts to a former employer in exchange for kickbacks and bribes.

Byrd-Bennett, who is 66, resigned from the school district in June, faces a maximum sentence of 20 years in prison and fines, according to the U.S. Attorney’s Office for the Northern District of Illinois.

Byrd is cooperating with prosecutors. As part of the plea agreement, prosecutors are expected to seek a 7/1 2 year sentence, according to the Chicago Tribune.

The 23-count indictment from the U.S. Department of Justice alleges that Byrd-Bennett steered the contracts to The SUPES Academy, and Synesi Associates, in exchange for an expectation of hundreds of thousands of dollars in bribes, kickbacks, and other compensation. 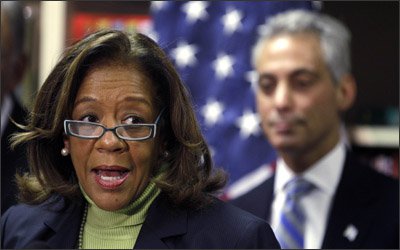 The U.S. Attorney’s Office of Northern Illinois alleges that the companies provided Byrd-Bennett with numerous other “benefits, including meals, an airplane ticket, and seats at basketball and baseball games,” according to the indictment.

According to the indictment, the companies agreed to: conceal the kickback money by funneling it into accounts set up in the names of two of Byrd-Bennett’s relatives; and pay Byrd-Bennett in the form of a “signing bonus” after her employment with the Chicago schools ended and the companies re-hired her as a consultant.

A Justice Department news release indicates that Byrd-Bennett also expected to receive reimbursement from the companies for costs associated with a holiday party she hosted for Chicago school district personnel.

In April, Chicago school officials announced that a federal grand jury had subpoenaed documents related to the SUPES contract.

Byrd-Bennett took a paid leave of absence from her job leading the nation’s third-largest school district soon after that revelation. She resigned in May.

Byrd-Bennett worked as a consultant for SUPES and Synesi, which specialize in training principals and school administrators, before taking a job with the Chicago school system in May 2012.  Mayor Rahm Emanuel appointed her chief executive officer in the fall of that year.

Here’s a look at the indictment:

Photo: Former Chicago Public Schools CEO Barbara Byrd-Bennett speaks at a news conference in Chicago in 2012 after being appointed to the position by Mayor Rahm Emanuel, right. Ms. Byrd-Bennett was indicted Thursday on federal bribery charges connected to her role in steering more than $23 million in no-bid contracts to her a former employers.–M. Spencer Green/AP-File

UPDATE: The original District Dossier blog post was updated on Oct. 14 with the news of Byrd-Bennett’s guilty plea. Denisa Superville covered that development.