Education institutions and companies around the world were defrauded of at least $70 million between January 2016 and October 2017, according to a recent study released by the Association of Certified Fraud Examiners. Of that amount, $19.6 million came from cases that originated in the U.S.

And that’s just the biggest cases of fraud identified by examiners in the organization. Much of “occupational fraud,” or deception by employees for financial gain, goes unreported in education and elsewhere.

The study looked at 97 cases of occupational fraud that were investigated in the education industry, which the organization defined as K-12 schools, colleges, and universities, trade schools, or education businesses.

“We don’t request identifying information about the victims,” said Andi McNeal, the director of research for the Association of Certified Fraud Examiners, in a phone interview. “We want to keep it anonymous for sensitivity reasons.”

Most commonly, fraud in education involved corruption (38 percent of the cases)—defined as a scheme in which an employee misuses his or her influence in a business transaction. and includes bribery or conflicts of interest. 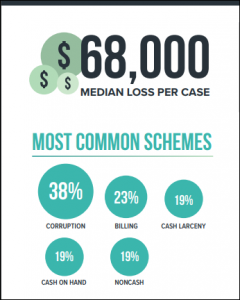 Billing schemes, at 23 percent, are the second most common way organizations are defrauded. These involve fraudulent disbursements where a person causes the employer to issue a payment by submitting invoices for fictitious goods or services, inflates invoices, or submits invoices for personal goods or services.

Cash larceny (19 percent) occurs when someone, during an incoming transaction such as receiving payments in a cafeteria, takes money, and “cash on hand” (also 19 percent) involves pilfering from a petty cash fund or money in a vault. [Last year, two sisters in Connecticut were arrested for allegedly stealing $478,000 over five years in their roles as “lunch ladies” at two New Canaan schools.]

For all industries, about $7 billion in losses were recorded by examiners who responded to a survey about the 2,690 fraud cases they investigated. Of those, 3.6 percent occurred in the education sector.

“It’s safe to say the $7 billion represented in our study is just a drop in the bucket,” said John Warren, co-author of the study, in an email. Many discoveries of fraud are never reported, and the organization found that only 58 percent of these fraud cases were ever referred to law enforcement. Companies often decline to prosecute for a number of reasons, including fear of bad publicity, because they reached a private settlement with the perpetrator, or a desire to move on from the crime, he said.

The market for VR, AR, and mixed reality tools and platforms is expected to soar in the years ahead. How can education companies make sure they’re poised to deliver products that schools actually want? On May 21, EdWeek Market Brief will explore the topic in a webinar. You can sign up here.

The association’s research looked at the largest cases of occupational fraud investigated by examiners in 23 major industry categories. For an examiner’s case to be included in the Report to the Nations: 2018 Global Study on Occupational Fraud and Abuse study, he or she must have been reasonably sure that the perpetrator was identified.

Nearly two-thirds of the cases in education—65 percent—occurred in the U.S. However, from a gross loss perspective, only 28 percent of the $70 million, came from the U.S., according to the association’s research. The median loss per case was $68,000. [An infographic with more statistics about education fraud is available on the organization’s site.] 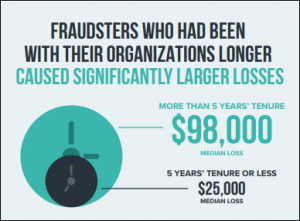 People who committed fraud and who had been with their organizations longer caused significantly larger losses in education: a median of $98,000 for those who had a tenure of more than five years, and a median loss of $25,000 for those whose tenure was five years or less.

Because the fraud examiners replied to the survey without identifying cases, it’s impossible to know which cases are included in this study.

However, fraud has made headlines in recent years, from the sentencing of the former Chicago Public Schools’ CEO and the former co-owner of a consulting firm being sentenced in 2017 for a corruption scandal, to Detroit public schools receiving restitution payments from a businessman who was imprisoned for his part in a kickback scheme that implicated 13 school officials.

Last fall, the Goldwater Institute compiled a list of fraud cases identified by the Arizona Inspector General in the state’s schools or districts dating from 1998 to 2018. The institute published a report on preventing fraud in school districts.

To protect themselves, school districts should consider providing anti-fraud training to every staff member, and even to volunteers who handle finances, said McNeal.

“It’s not just the school business official’s job,” she said. “It’s a matter of empowering people that there are red flags to watch out for, like seeing someone living beyond their means, holes in financial records that don’t make sense.” She said the message should be: “It’s all of our jobs to do this, and here’s a way to report it confidentially, and without fear of retribution.”

In education, 44 percent of occupational frauds are discovered thanks to such a tip, researchers found.