Cross-posted from the Politics K-12 blog

Local school leaders worried about potential cuts to major federally funded education programs may find some comfort in the words of Rep. Tom Cole, R-Okla., the chairman of the House appropriations subcommittee that oversees the U.S. Department of Education budget. 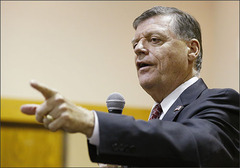 In a recent interview, Cole also stressed that while he has certain ideas about how federal spending on schools might shape up in the near future, he’ll want to get a lot of input first from President Donald Trump’s administration. And he highlighted the importance of federal spending on students with disabilities.

“I think it’s premature” to say definitively that there will be significant cuts to the Education Department, Cole told us in an interview. “I think that’s certainly a possible outcome, and may be more likely than not.” (Check out our recent story on this issue for more in-depth thoughts from Cole and others watching the education funding debate.)

The federal budget for fiscal 2017 is under a “continuing resolution” until April 28, which they approved last year to keep the federal government running at current spending levels while they try to get the budget in order. It’s unclear whether lawmakers will decide that, and with roughly half the fiscal year gone already, they might decide just to pass such a continuing resolution to cover the rest of fiscal 2017.

But whatever their decision, lawmakers must also begin considering the fiscal 2018 budget, which is slated to begin Oct. 1. Remember that Congress must still take some kind of action if it wants to get the federal budget out from under sequestration, or automatic caps on spending, in fiscal 2018. And while the chances appear good that defense spending will no longer be constrained by those caps, the future is less clear for education spending and other domestic programs. In fact, there’s concern that an increase in defense spending could mean a corresponding dip in what’s appropriated to domestic agencies like the Education Department, leading to both inter-agency as well as intra-agency fights over a smaller pot of cash.

Last year, Cole oversaw a federal spending bill for education that cut the department’s overall budget of $68 billion by $1.3 billion. As we wrote at the time, state teacher quality grants would take a notable cut of $400 million under that spending bill, while support for state assessments would fall by $78 million. And the $120 million Education and Innovation Research program would also be completely eliminated.

However, the Oklahoma Republican also said he thought big-ticket formula-funded programs like Title I, which serves disadvantaged students, and the Individuals With Disabilities Education Act are important “building blocks” for school districts around the country.

“Everybody has children that have special challenges,” Cole said, referring to the importance of IDEA funding.

In fact, the fiscal 2017 education spending bill that passed out of Cole’s subcommittee included a $500 million increase for IDEA state grants, up to $12.4 billion. And Title I funding would go up by $450 million. But will Trump go along with those kinds of increases? Cole’s waiting to find out.

“We don’t have a lot of time” to put together a regular budget (not one under the continuing resolution) for the remainder of fiscal 2017, Cole said. “So they’re going to have to give us some guidance pretty quickly.” And the president hasn’t yet had the chance to present a proposed budget for either fiscal 2017 or fiscal 2018, Cole added.

It’s also worth noting that the House budget Cole’s committee approved last July also essentially barred the department from withholding federal aid from schools for not following its controversial guidance on transgender students. Cole called that guidance an example of Washington overreach. That guidance may not last long under Trump.

“With the new president, obviously quite a bit is up for discussion,” Cole said.