The coronavirus has hit many education companies across the market hard.

A new special report by EdWeek Market Brief probes that pain in-depth, looking at how education businesses have sought to overcome obstacles posed by the crisis. One section of the report specifically delves into how companies have sought to reduce costs by making cuts to the size of their staff, and to their salaries.

The research, collected through a pair of surveys conducted in April and July of a combined 1,700 education business officials, found that more than a third of education companies—37 percent—said they have imposed salary reductions on their staff during COVID-19. 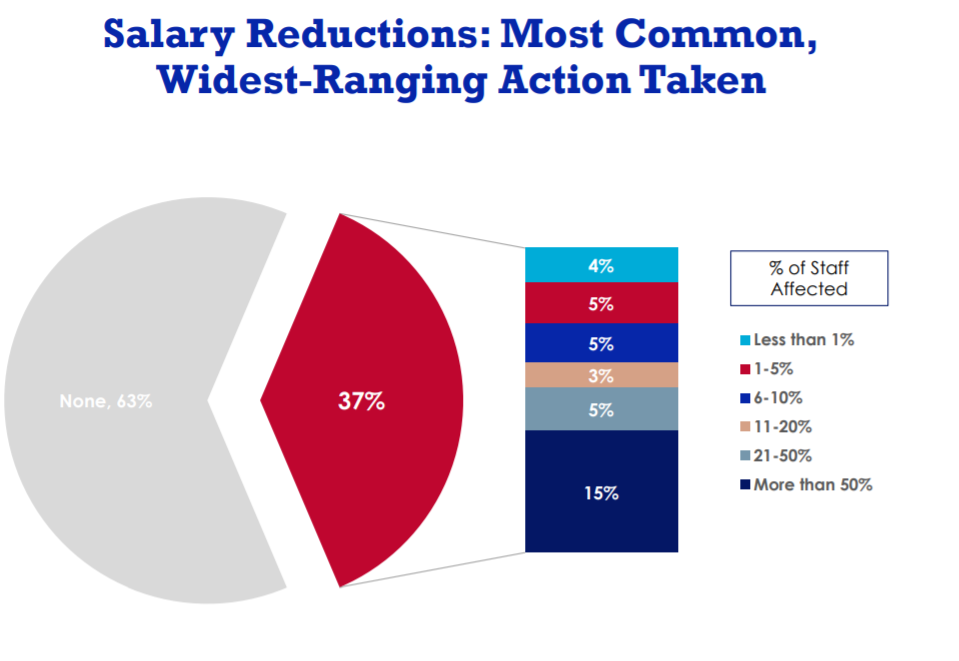 That’s a slightly larger portion than the companies that elected to cut costs through layoffs (33 percent) or furloughs (30 percent).

The portion of company officials who said their businesses had made layoffs rose from 23 percent to 33 percent from April to July—which probably speaks to COVID-19’s increased severity on the industry over time.

The fact that slightly more education companies have chosen to reduce salaries than impose layoffs or furloughs may suggest that K-12 businesses have seen value in retaining talent, rather than shedding workers and then seeking to replenish their staffs again when conditions improve.

Of the 37 percent of company officials who said they had imposed mandatory salary cuts on their staff,  the biggest portion of them, 15 percent, said more than half their staffs were affected by those reductions.

The Benchmark Survey Report: COVID-19’s Impact on the K-12 Education Industry, was recently released exclusively for EdWeek Market Brief members. The April survey was taken by 964 respondents working in K-12 companies. The July survey had 765 respondents. More than 60 percent of the survey respondents were in executive or management positions in their companies.

The report takes an in-depth look at how the coronavirus has affected education companies on many fronts, including:

The report also surfaces the human toll of education companies’ struggles through an open-ended question, in which the business officials that had made layoffs were asked to describe the scope of the layoffs.

“[Layoffs] mostly in sales and customer success because of the reluctance of schools to purchase at the moment,” one said.

“Every department impacted,” wrote another. “We work primarily with individual contractors and all have been put on hold until further notice,” added another respondent.