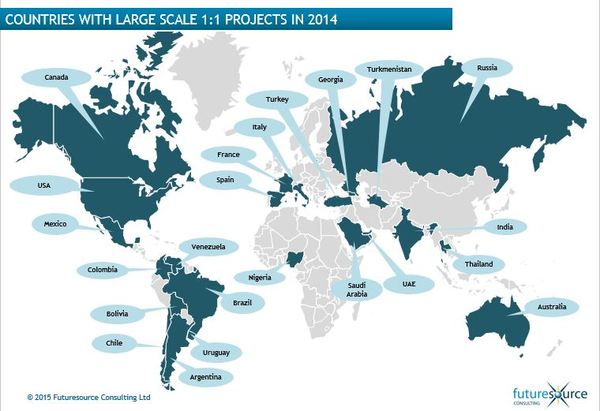 School children around the world are receiving computing technology at an unprecedented level, with the number of devices provided to students expected to grow by 12 percent in 2015 over last year, according to Futuresource Consulting.

Futuresource, a U.K.-based research and forecasting business, projects a 10 percent growth in mobile devices for U.S. schools in 2015.

Other countries are planning dramatic growth as well. “The amount of projects we see in Latin America is incredible. For many [countries] it’s a continuation of national deals. That’s the case in Argentina, Uruguay, Venezuela, and Chile,” said Michael J. Fisher, associate director of Futuresource’s education division, in a phone interview.

In 2014, seven countries reported distributing more than 500,000 computing devices as part of 1-to-1 projects, in which every student receives a computing device, whether that’s a tablet or a laptop, said Fisher.

The countries that have embarked on the largest 1-to-1 projects were:

Monitoring the vicissitudes in ed tech plans and purchases in different countries can be challenging, though.  Take, for instance, Thailand and Turkey—two countries following different trajectroies in 2015 after each rolled out ambitious projects to distribute more than 500,000 devices to students last year.

A national project in Turkey is expected to distribute 750,000 more tablets this year, and 350,000 65-inch interactive flat panels displays by the end of 2016, to provide one flat-panel display in every classroom.

Conversely, a tablet project in Thailand was discontinued after a military coup last year disrupted the policy, and because the initial purchase of inexpensive products had a high failure rate

“Now they’re looking at front-of-class interactive displays,” Fisher said, “while most of what we’ve seen [in other countries] is moving from front-of-class to 1-to-1.”

In India, the largest 1-to-1 project in 2014 was confined to one of the country’s states, providing laptops to students in Tamil Nadu.

Other ongoing national projects over the last few years that are expected to continue include: Project Canaima in Venezuela, Conectar Igualdad in Argentina, and Plan Ceibal in Uruguay. (Last year, Uruguay announced that it had chosen the Schoology platform to provide academic content for its technology efforts.) Mexico has a national project underway, with plans to distribute 1 million laptops, and Brazil has begun a national teacher tablet project that is expected to distribute more than 1 million units this year, Fisher said.  More projects are in the pipeline in Bolivia, Ecuador, Colombia, Surinam, Honduras, and Peru.

National projects are also being discussed in a number of African countries, including Uganda, Tanzania, and Djibouti. Brazil’s Positivo Informatica SA last year announced that it would build a factory in Rwanda to manufacture devices for schools in a joint venture with BGH Group. A Kenyan project that would provide 1.2 million laptops has been delayed more than once, Fisher said. And Nigeria has funding, but the country’s political instability raises questions about its likelihood of completion this year, he said.

In the United States, the push to provide digital devices for online assessments has fueled rapid growth in the market for mobile devices in the past year, said Fisher. There was a 40.5 percent growth in 2014 compared to 2013, driven by the technology requirements associated with the common-core standards and tests, according to Futuresource. In the U.S., deployments are carried out from district to district, rather than on a national scale.