Google is making a play for a bigger share of the K-12 marketplace.

The company released news that thousands of books will soon be available for K-12 online book rentals, and that more device manufacturers are releasing Chromebooks or tablets with Google Play for Education, an online destination where schools can find teacher-approved, educational apps and videos.

The developments follow a recent Wall Street Journal  report about an independent market research firm’s findings that Chromebooks commanded a 19 percent market share for mobile devices in schools, according to preliminary 2013 findings.

On Jan. 29, Google announced partnerships with Houghton Mifflin Harcourt, HarperCollins, and Random House that will result in thousands of books and textbooks becoming available for K-12 teachers to rent via Google Play for Education. Google Play was released in mid-November after beta testing in 50 schools. 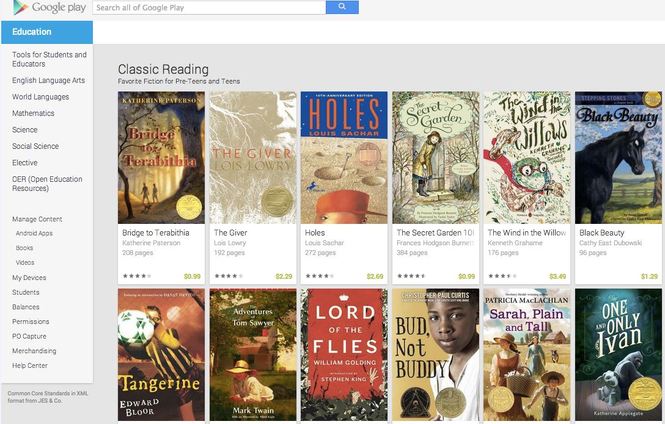 The book and textbook partnership grew from educators’ interest, according to Rick Borovoy, Google product manager.

“This is built on a huge amount of user research on what schools want, and where the pitfalls are in how they use books today,” he said in a phone interview. Rentals will range in price and length of availability, but Borovoy gave the example of “Ramona the Pest” renting for $1 per student. “For $30, they can teach this to the whole class; that’s flexibility they never had before,” he said.

A variety of K-12 books will be available on Google Play for Education, from digital texts like “GO Math!”  and “Journeys Common Core”—both from Houghton Mifflin Harcourt—to classics like “Bridge to Terabithia” (Harper Collins), “Lord of the Flies” (Penguin), and “Things Fall Apart” (Random House).

Meanwhile, Google is seeing more device manufacturers join its universe. Samsung announced it is releasing its first tablet for education, a 10.1-inch tablet based on the Samsung Galaxy, and loaded with Google Play for Education. It will be available in April. Toshiba announced that its new Chromebook will be available for education customers, too. This 13-inch device, which starts at $299, has a battery that lasts up to nine hours. And Lenovo announced the new ThinkPad 11e Chromebook series, available as a 360-degree touchscreen or traditional laptop this spring, starting at $349.

The emergence of Chromebooks and Google Play is a direct challenge to the iPad’s dominance in the education tablet market.