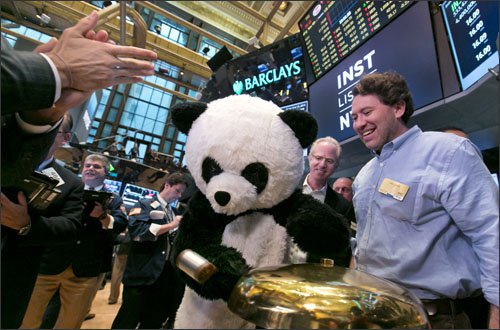 Instructure, the company that launched the Canvas learning management system in 2011, became a public company Friday.

Now listed on the New York Stock Exchange under the ticker symbol “INST,” Instructure raised between $75 million and $80 million with its initial public offering of stock, according to Josh Coates, CEO of the Salt Lake City-based company, in a phone interview from the floor of the exchange. More than 3.5 million shares were sold, and the stock’s closing price was $18 per share, up 12.5 percent from its opening price of $16.

Coates was teaching as an adjunct instructor in venture startups at Brigham Young University when he met two graduate computer science students who had launched Instructure. He agreed to mentor their startup before joining it a few years later. The team’s idea from the start was to have a company that would become public, said Coates.

“We wanted to make an independent, strong company out of Instructure,” he said, adding that a public company signals that “it’s lasting; it’s not going to be a flash in the pan and get bought out in a couple of years.”

Although it has yet to become profitable, Instructure has grown quickly in a market that is often a tough one for ed-tech startups. To date, it lists 1,600 customers in 25 countries, including K-12 schools, colleges, universities, and corporations.

“I was really surprised at just how much of a K-12 footprint they now have,” said Phil Hill, a partner in MindWires Consulting, a digital education consulting firm. “They started out as a higher-ed focused company, but by this summer the data they were sharing showed they had roughly the same number of K-12 clients that they had for higher-ed. I think that’s a really important factor in their going public; they’re not just seen as a one-market company.”

Canvas’ competitors include Blackboard, which started in higher education but also serves the K-12 market; Schoology, which recently raised $32 million in funding from a growth equity firm, and won a contract with Los Angeles Unified School District; and Desire2Learn.

“I would say [Instructure’s IPO] affects the whole LMS market,” said Hill. “It will make it easier for other ed-tech companies to become stronger, encouraging further investment and helping them to become more mature.”