Instructure, which provides a cloud-based learning management system for schools called Canvas, has filed its intention to become a public company with the Securities and Exchange Commission.

Although the number of shares to be offered and the price range for the proposed offering have not been determined, Reuters indicated the company could be valued at $500 million to $800 million. Instructure intends to list its common stock on the New York Stock Exchange under the ticker symbol “INST.”

Instructure sells Canvas to the K-12 and higher education markets. For corporate training, the company offers a learning management platform called Bridge. The following bar graph depicts, in red, the company’s growth in K-12 schools. Published on the e-Literate blog in July, the graph —which was provided by the company—illustrates its trajectory. 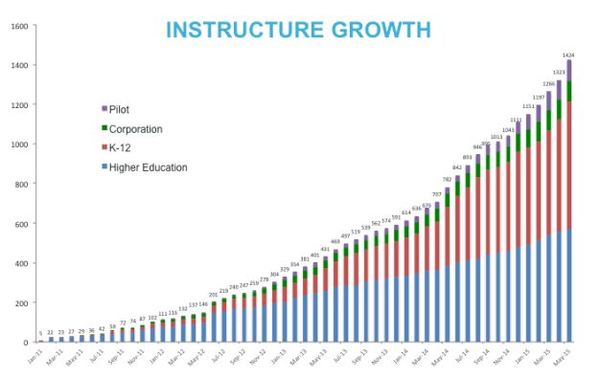 In its S1 filing with the SEC, the company spelled out its fast growth, strategy, and the risks associated with investing in it, as is required in a  prospectus for an initial public offering.  Among the highlights of that document:

Reach: As of June 30, 2015, Instructure had more than 1,400 customers, representing colleges, universities, K-12 school districts, and companies in more than 25 countries.

Growth Strategy: In the K-12 market, schools “have yet to widely adopt learning management systems,” the company indicated. For both higher education and K-12, the company plans “to increase revenue from this customer base by selling additional applications and services,” the prospectus said.

International: For the six months ending June 30, 2015, international customers accounted for 6 percent of the company’s revenue.

Risks: Among the risks identified in the prospectus are the company’s history of losses, and anticipation that losses are expected into “the foreseeable future,” with the possibility that the company may not achieve or maintain profitability. The company also indicated that it depends on new customer acquisition and expansion, and customer renewals. Since it is a relatively young company, it lacks a “long history on which to base forecasts” for renewals, the filing said.

Michael Feldstein, a partner at MindWires Consulting who blogs for e-Literate, also questioned the strength of Instructure’s data analytics capabilities, which he indicated “are fairly weak,” as he interpreted them from the company’s S-1 or prospectus.

Instructure has raised $70 million in financing for its company in recent years.  In January, the company raised $40 million in a pre-IPO series E round of funding, and in 2013 it raised $30 million.

This is the second K-12 company to share its plans to sell stock in the past month: In September, McGraw-Hill Education also announced its plans to go public. Other K-12 companies that are public include Pearson, Houghton Mifflin Harcourt, Scholastic, and K12 Inc. Amplify, which was part of the public company News Corp., changed its ownership status almost two weeks ago when it was taken private through a management buy-out. Meanwhile, Blackboard, a privately held ed-tech company and LMS provider, is for sale for as much as $3 billion, Reuters reported in July.

Credit: This bar graph was used by permission from e-Literate, which received it from Instructure earlier this year—prior to the required “quiet period” after an S-1 is filed.