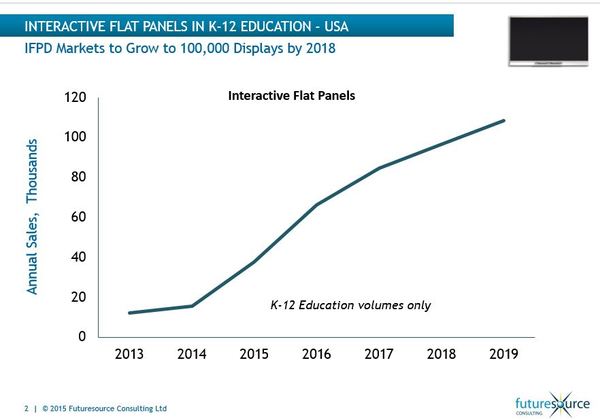 In choosing interactive displays—the front-of-the-classroom technology that many teachers count on—more educators in the years ahead are likely to rely on up-to-date flat-panel displays than they are whiteboards, according to research from Futuresource Consulting Ltd.

While the overall U.S. market for either interactive technology declined in the first quarter of 2015, Futuresource, a U.K.-based market and forecasting firm, predicts that schools making purchases this year, and into the future, will increasingly choose the flat-panel display technology resembling what consumers use in their homes.

Flat-panel displays cost more than their whiteboard counterparts, which use a projector to show images. (We explored the dynamics of this market with replacement sales and the reasons for flat panels’ rising popularity, in earlier blog posts.) 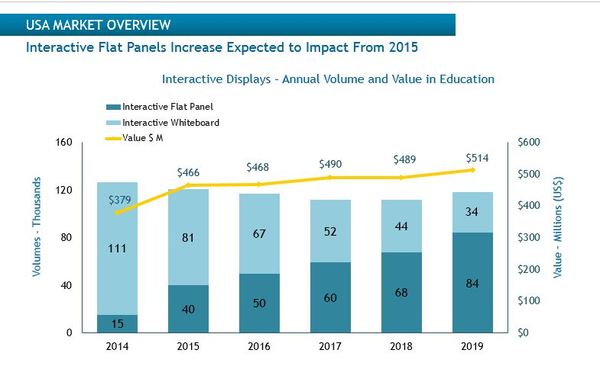 Futuresource attributed the most recent decline in sales of interactive displays to schools instead investing heavily in devices necessary for 1-to-1 learning programs. Those purchases are fueled by the new assessments that are tied to the common core, according to Futuresource. In addition, districts are investing in improving Internet connectivity, which “diverts funds and focus away from front-of-class displays,” the company said in its announcement about the global interactive display market.

The expected increase in educational use of interactive flat-panel displays—compared to interactive whiteboards—is indicated by the fact that more companies in this sector are competing in the school market, said Colin Messenger, a senior analyst at Futuresource.

Interactive displays are likely to be featured prominently at the International Society for Technology in Education, or ISTE conference, where these devices are among the ed-tech tools being exhibited for educators to check out, said Messenger.

Globally, the acceptance of interactive flat panels in the market has been driven by a few factors, including large-scale investment projects like the FATIH project in Turkey and purchases by the Chinese Education Department, which is integrating the technology into that country’s educational system, according to Messenger.