By the end of 2013, total shipments for tablet computing devices in the U.S. education marketplace are expected to exceed 3.5 million units—a 46 percent increase over 2012. In the first half of 2013, 94 percent of that market has gone to Apple’s iPad, according to Tom Mainelli, research director focusing on the tablet market for IDC Research, a San Mateo, Calif.-based firm that provides market analysis of technology.

In fact, last week Apple’s CEO Tim Cook said, “we had our best education quarter ever,” quoting that 94 percent statistic in a conference call about Apple’s fourth quarter 2013 results, but didn’t cite where it originated.

Mainelli confirmed that it came from a report his company finalized in September, with numerous clients, including Apple.

“The percentage was actually combined K-12 and higher education, but the vast majority of those shipments was K-12,” Mainelli wrote in an email. He explained that K-12 comprises a larger portion of the total because, in higher education, most tablets are purchased by students or their parents—and that consumer-oriented figure is not included in the totals.

In July, we reported that more than 80 percent of district technology officials said districts use or plan to use iPads over the next year or two, according to the results of a study released by Interactive Educational Systems Design Inc.

In Maine, Apple won a big contract for district purchases of iPads and MacBook Air laptops, despite HP being given “preferred” status by the governor.

While a case can be made among educators for Chromebooks, as a blogger for Forbes explains, Cook in the conference call responded to its competitor this way: “We do see Chromebooks in some places, but the vast majority of people are buying PC/Mac or an iPad.” And then he dropped the 94 percent number.

The story is less rosy for Apple on the consumer side, which begs the question whether the education market will remain as staunchly Apple-oriented, particularly given the iPad’s often higher cost. Business Insider shows the iPad’s diminishing market share, from 71 percent of the consumer market in the first quarter of 2012 to 40 percent in the same period this year, then down again to 28 percent in the second quarter of 2013. Samsung’s tablet is gaining on the iPad in the consumer market. 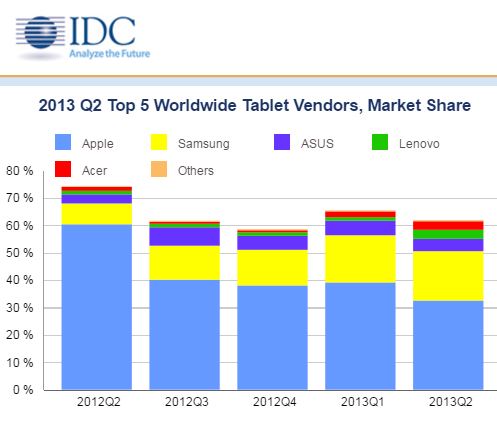 More recently, Apple’s iPads have been making headlines, but not for the right reasons. Since the Los Angeles Unified School District made the iPad the device of choice in its $30 million tech contract with Apple, the initiative has fallen on hard times after security and logistical problems with the rollout.