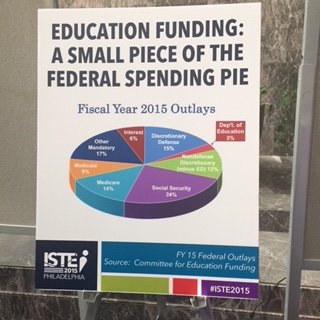 Thousands of educators, ed-tech providers, and students are convening here for ISTE 2015, the country’s largest gathering dedicated to advancing—and understanding—the impact, and potential, of technology in education.

Participants and presenters hail from Saudi Arabia to Australia, from China to the U.K., but the vast majority of attendees call one of the 50 states home.

Hosted by the Washington-based International Society for Technology in Education, the conference, held Sunday through Wednesday, is expected to draw 18,000 attendees.

Even with education funding commanding only 3 percent of the federal “budget pie”—as indicated by the sliver above—ed-tech is increasingly considered a necessity in districts, wherever the funds for it can be found.

ISTE attendees also are encouraged to send a “prewritten letter to Congress about ed-tech funding,” which would entitle them to an entry ticket for a drawing for a FitBit or Kindle Fire.

Two of the featured speakers during the opening ceremonies emphasized the importance of diversity in educational technology.

For students who are sidelined by opportunity or ethnicity in access to ed-tech and STEM careers, Rafranz Davis, executive director of professional and digital learning at Lufkin ISD in Texas, said the problem is this: “You can’t be what you can’t see.” She explained some biases students face, like being required to make an in-app purchase in order to get an avatar that resembles them.

Broadcast journalist Soledad O’Brien shared her experience growing up in a homogeneous Long Island community as the daughter of a black Cuban mother and a white Australian father—both educators—in a time when their family was the exception rather than the rule.

O’Brien focused on the inequities that exist today for many students, and said technology can be a means of bridging the chasm between what they don’t know, and what they should.

The young people O’Brien mentors often don’t know what jobs are available to them, because they have never heard of the careers, or seen them demonstrated, she said. A technology like Google Expeditions—which provides a virtual reality experience—can solve that problem, she said. 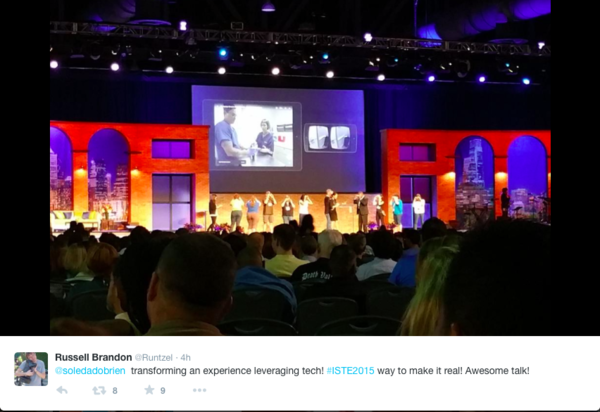 O’Brien demonstrated a virtual field trip to a veterinarian’s office during her speech, as shown in the tweet above. Ten audience members were invited onstage to use the cardboard viewers, which fit over smartphones. In this trip to the vet’s, they used the technology to watch what happens in a surgery.

Despite the conference’s emphasis on ed tech, O’Brien told the audience “it’s never about the technology…It’s about the problems” that technology can solve.

Image: The ISTE Advocacy booth in the registration area of ISTE 2015. Photo by Education Week